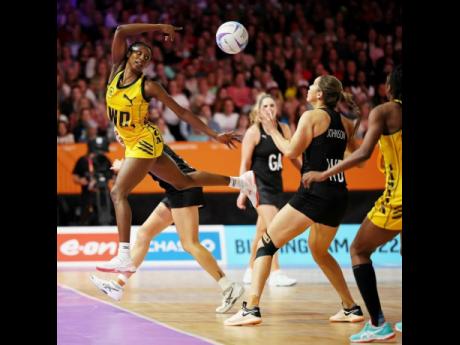 Jamaica’s Jodi-Ann Ward (left) recovers a ball during the netball semi-final match against New Zealand at the Commonwealth Games at NEC Arena in Birmingham, England, in August. The Sunshine Girls won that match, but lost the Taini Jamison Trophy to New Zealand in the just-concluded series.

A haphazard buildup to Jamaica's first netball series since the Commonwealth Games, ended with the Sunshine Girls losing the Taini Jamison Trophy 2-0 to New Zealand after going down 75-35 in the second and final Test at the Eventfinda Stadium in Auckland yesterday.

The Silver Ferns led wire to wire, finishing with a 96 per cent shooting accuracy, while the Sunshine Girls had 80 per cent, to end the two-match series that was overshadowed by problems.

Shimona Nelson, Sunshine Girls' captain for the series, scored 26 of Jamaica's 35 goals. They trailed 36-22 at halftime but were outclassed in the second half, scoring six points in the third quarter and seven points in the fourth.

The series, which was originally set to be a three-matches, was reduced to only two games because of the problems experienced.

The Sunshine Girls only had seven players available for selection for the first Test on Wednesday, as five members of the squad failed to acquire United States of America visas, which prevented them from travelling to New Zealand.

The management, however, added veterans Carla Borrego and Romelda Atkin-George, who both reside in the New Zealand-Australia area, to increase their numbers, with coach Connie Francis also included as a player.

The Sunshine Girls were battered in the first Test 70-45, with international debuts given to Abigale Sutherland and Mischa Creary.

Jamaica had beaten New Zealand in the semi-finals of the Commonwealth Games in August and the series was being used as preparation for the next summer's Netball World Cup in South Africa.