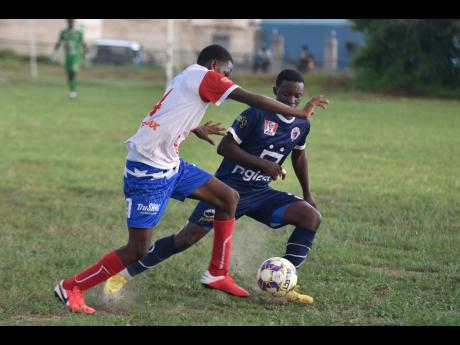 Jamaica College's (JC) coach Davian Ferguson is bemoaning a lack of conviction from his players despite recovering from being a goal down to beat Holy Trinity 4-2 in their Inter-Secondary School Sports Association (ISSA)/Digicel Manning Cup schoolboy football match at Bell/Chung Oval yesterday.

Ferguson also called for the players to improve their discipline to seriously go after their ambitions this season, in the hunt for their 31st hold on the coveted title.

"When we went 1-0 down we lost a little confidence but we were still in control of the game. When we went 1-1 it gave us a little bit of confidence and we started to push and we got the second and third goal and at 3-1 up the game got easy," Ferguson said.

"Indiscipline started to creep in and players started doing what they felt like and it gave Trinity a little foothold back in the game. They then got another goal and it gave them a lease of life, and at 3-2 it was a bit more interesting for them but we got the fourth goal and that put the game to bed.

"These are games we have to win convincingly. The performance was not bad but in terms of our conviction, it was not there. It has to be fixed if we are going to meet the objectives that we have. It is something we have to push and get every member of the team to understand that on or off the pitch, discipline is the key," Ferguson said.

Kishawn Ellis fired the home team in front after 10 minutes but J'havier Lynch levelled in the 34th to end the half at 1-1.

JC created several chances after the break but Holy Trinity kept them at bay until the 73rd when Lynch got a second through a cheeky assist from Maquan Aldridge.

Two minutes later Kevaughn Wilson put them 3-1 up and although Teiyono Vassell scored to make it 3-2 in the 82nd, Giovanni Taylor netted in time added to seal the win.

Holy Trinity coach, Nicholas Stewart, said they lacked depth, but expects to be in the running for a second-round spot despite one win in three matches.

"It was a real good performance from the team and I am proud of the guys because at the end we tried to get the equaliser but we got caught on the break.

"We matched them for the first 70-80 minutes but we lack squad depth, however, we have played the two better teams in the group and we believe we can beat everybody else and come in the top three and get out the group," Stewart said, about losing to JC and St Catherine.

The result put JC atop Group B standing, but only on goal difference over St Catherine, who also boast seven points from three games.

St Jago are next with six points, followed by Holy Trinity with three points.