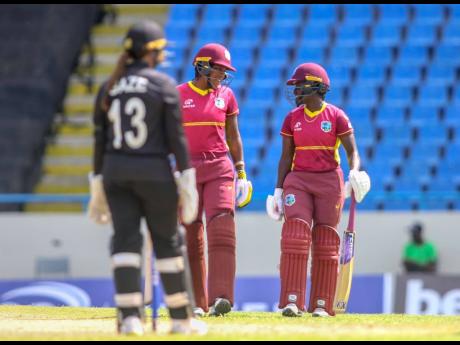 Jamaican all-rounder Chinelle Henry put on a spirited performance with the bat and ball but her efforts failed to prevent West Indies Women from going down by five runs to New Zealand under the Duckworth-Lewis-Stern method in their rain-affected opening one-day international (ODI) in Antigua.

Asked to bat first, West Indies reached 168 for seven in 35 overs, after the match was reduced because of a wet pitch. When bad light forced the game to be called off, the visitors were 159 for five in 33 overs.

The right-handed Henry, along with Kyshona Knight, rescued West Indies, who were struggling at 74 for five in the 21st over.

The pair dug deep and added 83 runs for the sixth wicket, with Henry going on to top score with 44 from 34 balls, with five fours before she was caught off Jess Kerr.

Two balls later, Kerr then accounted for Knight who was also caught. Knight made 36 from 61 balls with a single boundary, as Kerr finished with two wickets for 29 runs and Fran Jonas two for 22.

Jamaican opener Natasha McLean, in her first game back for the West Indies in two years, made 20 from 23 balls with three fours and a six. McLean, and compatriot Rashada Williams who made 19, added 29 runs in the opening partnership.

In reply, New Zealand got off to a good start with 54 from veteran opener Suzie Bates and 25 from captain Sophie Devine. Despite three wickets from captain Hayley Matthews, the visitors were well on their way to getting the target before bad light forced the players off the pitch.

Amelia Kerr was left not out on 47, as Henry and Afy Fletcher picked up a wicket each.

Henry was glad that she was able to perform with the bat when West Indies needed her, however, she was disappointed that the effort wasn't enough to secure a win.

"With the fight shown as a bowling unit, there is no doubt that we can go on to level and eventually win the series," said Henry.

The teams play again on Thursday.