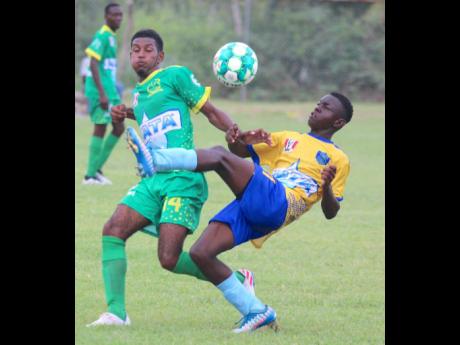 The red and gold Cornwall, suffered a 2-1 loss to Green Pond High last Saturday to slip to second position with three points from two matches in Zone A standings.

Green Pond are at the top of the zone with six points from two matches and will play away to Irwin High today, with St James High entertaining Maldon High in the zone's other match.

According to Weatherly, Saturday's loss was a fluke and Cornwall will be out to prove the doubters wrong.

"That was an anomaly. If you saw the game, it was obvious we spent most of the game in their half, however, that's how football goes. When you get the chances and don't take them you pay dearly. It is a learning curve for us so we just have to build on it.

"We need to bounce back strong because our aim is to top the zone even though people are already saying we can't do it and that our team is deficient. I don't even bother to worry about what is being said. I know the hard work that is being put in so," Weatherly said.

Garfield Anderson, coach of Anchovy High, wants his young players to use this season as a learning curve, but is hopeful they will surprise themselves by being spoilers in the competition.

"We are a very green team. None of them (players) have even played Under-16 more so daCosta Cup. We are starting from scratch but we know nothing is impossible in football.

"We are going there to apply ourselves against a strong Cornwall College. We are an ambitious bunch, so if we can upset the applecart here or there that would be good for us," Anderson said.

Over in Zone I, there will be a doubleheader at Drax Hall, St Ann, with Brown's Town High taking on Oracabessa High in the early kick-off at 1 p.m. before Ocho Rios High battle Marcus Garvey High at 3 p.m.

Charlemont vs Ewarton at Charlemont

McGrath vs Enid Bennett at McGrath

Guys Hill vs Dinthill at Tacky

Glenmuir vs Tacius Golding at Glenmuir