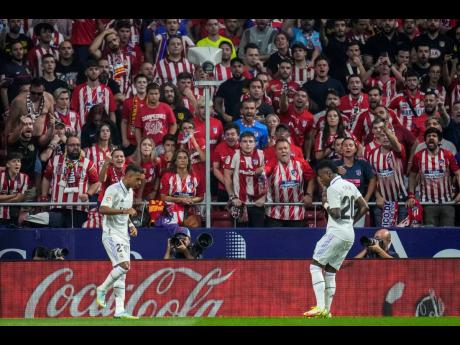 Real Madrid’s Rodrygo (left) celebrates scoring with teammate Vinicius Junior during their Spanish La Liga football match against Atletico Madrid at the Wanda Metropolitano stadium in Madrid, Spain, on Sunday. With a goal and a dance, Real Madrid’s young Brazilian forwards made a strong statement against racism in the match.

With a goal and a dance, Real Madrid's young Brazilian forwards made a statement against racism in soccer this weekend.

With their samba-like moves after a goal in the derby against Atletico Madrid on Sunday, Rodrygo and Vinicius Junior made it clear they are not backing down from the racist language from their critics or the racist chants from the opposing fans.

"Dance wherever you want," Vinicius wrote on Twitter in a message directed at Rodrygo after Madrid's 2-1 win at Atletico in the Spanish league.

"White and BLACK dance," Rodrygo posted not long afterwards, along with the photo of the young Brazilians celebrating together.

Rodrygo had just scored Madrid's first goal in a derby whose buildup had been surrounded by controversy over Vinicius' recent goal celebrations.

Vinicius, who is black, was upset when a guest on a television sports talk show used racist language to criticise his dances. The 22-year-old Brazilian, who is set to make it to his first World Cup in November, said his actions on the field were "being criminalised," and that his success as a black Brazilian man in Europe was "annoying" to some.

The controversy continued just before Sunday's match, as online videos showed some Atletico fans outside the Metropolitano Stadium chanting, "Vinicius is a monkey."

"This (derby) was even more special because of everything that happened during the week, and we answered on the field," Rodrygo said.

Some Atletico fans threw objects towards Rodrygo and Vinicius as they celebrated the goal near one of the corner flags.

The talk show where Vinicius was criticised for "acting like a monkey", had apologised by saying the expression was "unfortunate" but not racist, because it said those words are normally used in Spain to talk about someone doing "silly" things.

Madrid had issued a statement supporting Vinicius and condemning racism, and coach Carlo Ancelotti also defended Vinicius, although he also contradicted the Brazilian by saying he didn't think there was that type of racism in Spain.

It wasn't the first time Vinicius was subjected to racist taunts, though. It happened last year during a 'clasico' against Barcelona at the Camp Nou.

There were also cases against other players, including Athletic Bilbao's Inaki Williams.

Among those who came out to publicly support Vinicius were Pele and current Brazil forward Neymar, who told Vinicius to "keep dancing".

The duo's celebration on Sunday was widely shared online and was praised by many in Brazil and Latin America. Some players in Europe also showed their appreciation.

There will certainly be more of the same going forward.

"I repeat it to you racist: I will not stop dancing," Vinicius said. "Whether at the Sambodromo, at the Bernabeu or wherever."