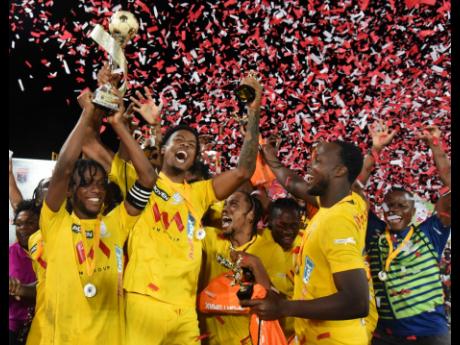 Members of Harbour View FC celebrate after being presented with the Jamaica Premier League (JPL) trophy at Sabina Park in July. They defeated Dunbeholden in the final.

Defending champions Harbour View have signed four players ahead of the new season in a bid to retain their Jamaica Premier League (JPL) football title.

The league is set to start on October 23 and among the players suiting up for the champions will be goalkeepers David Martin and Romario Palma and midfielders Demar Rose and Trayvon Reid.

Clyde Jureidini, general manager of the five-time JPL champions, believes Harbour View had to bring in the two goalkeepers urgently in the transfer window.

"We have a young, emerging goalkeeper in Anthony Bennett and an experienced one in Amal Knight. We had some experiences that were new to us, where both goalkeepers at one stage were invited to national teams.

"Amal Knight for the senior Reggae Boyz and Bennett for the U-20, We had a third-string goalkeeper who was the only one in training and the only one available for games, that we found tenuous and we couldn't do nothing about it," said Jureidini.

One of the two midfielders added to the HVFC squad ahead of the season is a former club member and attacking midfielder Demar Rose, who Jureidini said the management of Harbour View believes will strengthen their midfield.

"We were always looking for an attacking midfielder. Demar Rose grew up in the Harbour View Football Club from U-13 to U-20 and also played Premier League before.

"We saw it fit to approach him. He and Portmore United were in agreement, so he's back in that natural position with a history and a culture of how the club operates," Jureidini added.

Reid, who was on loan with Harbour View from Tivoli Gardens, also inked a permanent move to the 'Stars of the East'. The 22-year-old midfielder, who was impressive last season and was instrumental in their offensive, will be charged to carry over his good run of form. Jureidini is eyeing him as a player for the future.

"Yes, definitely. He (Trayvon Reid) came here and was on loan last season. We had a loan agreement with Tivoli for him and at the end of last season we renegotiated and fortunately for us both Trayvon and Tivoli were in agreement for him to be a fully transferred Harbour View player," said Jureidini.

The experienced administrator agreed with the notion that there's a difference between chasing and being chased, hence the task of repeating as champions will be more difficult to achieve in the upcoming season.

"Now as champions, we have to take on those added responsibilities," Juriedini said.