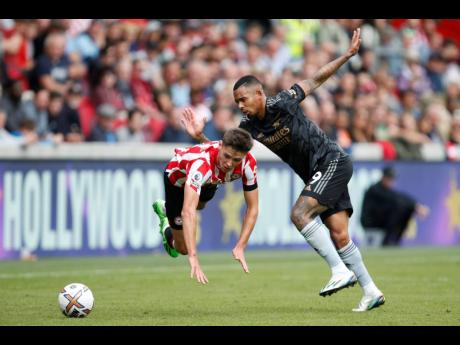 Walking off the field at Brentford's small stadium in west London had a very different feel for Arsenal this time around.

A straight-forward 3-0 win at the 17,000-seat Gtech Community Stadium yesterday retained Arsenal's spot atop the English Premier League (EPL) table and made it six victories in seven games for Mikel Arteta's side.

Quite a contrast from a year ago, when Arsenal opened the season with a humbling 2-0 defeat at Brentford -- playing their first topflight game in 74 years -- and went on to lose the next two games as well for their worst start to a campaign in 67 years.

"A lot of people described that day as embarrassing but I looked at it as a character-building day," Arteta said. "You have to learn from those moments and then days like today happen. We are enjoying our football."

And there's plenty to enjoy, especially from the team's newcomers.

Defender William Saliba -- who spent the last three seasons out on loan -- underlined his status as the team's new fan favourite with his second goal of the season, while summer signings Gabriel Jesus and Fabio Vieira also scored.

All EPL matches this weekend paid tribute to the queen with a minute's silence before kickoff followed by a rendition of the national anthem. There was also a minute's applause after 70 minutes at each game in celebration of the queen's 70-year reign.

At Brentford, Saliba headed in a corner in the 17th minute before Jesus scored his fourth goal of the campaign with another header around halfway through the first half. Vieira then marked his first league start by scoring with a long-range effort early in the second.

Vieira started in place of injured playmaker Martin Odegaard and made a strong claim for getting more playing time after spending much of the season on the bench so far.

Arteta even had the luxury of sending on 15-year-old Ethan Nwaneri for the last few minutes, making him the youngest player ever to appear in an EPL game.

Arsenal now heads into the international break one point ahead of defending champion Manchester City and Tottenham. Their next game will be a better gauge of their title credentials, as Arsenal hosts Tottenham in the north London derby on October 1.

Everton's early-season struggles have been mainly due to a lack of attacking threat in the absence of injured striker Dominic Calwert-Lewin, scoring just four goals in their opening six games.

Summer signing Neal Maupay finally scored his first goal for Everton against West Ham and that was enough for a much-needed victory for Frank Lampard's team.

It was a well-taken goal, too, as the Frenchman collected a pass from Alex Iwobi on the edge of the area and used his first touch to set himself up for a volley that snuck inside the near post in the 53rd minute.

The win lifts Everton to 13th place with seven points, while West Ham -- which have only scored three league goals this season -- are in 18th on four points.