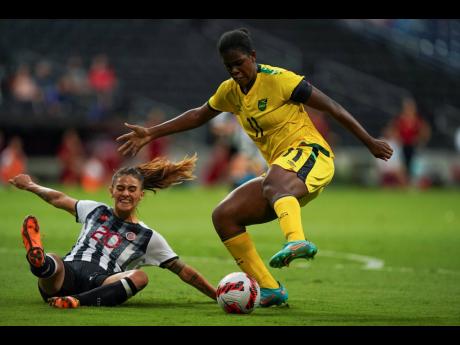 While it was not a winning result on the field during the national senior women's tour of South Korea, national striker Khadija Shaw says that their two-game series against the Koreans has provided them with a framework to better prepare themselves against the strong opposition that they will face during next year's Women's World Cup.

The Reggae Girlz were beaten 2-0 in their closed-door friendly at Paju National Football Centre yesterday, ending their tour winless after a 1-0 defeat on Saturday at the Hwaseong Sports Complex Stadium. Shaw, who played in the first game, was on the bench for yesterday's final game, allowing an opportunity for other players to get evaluated by the coaching staff currently led by interim head coach Lorne Donaldson.

Shaw said that it was important that the team learns to deal with unfamiliar situations similar to what they encountered against the South Koreans.

"Coach said in the beginning that he wanted to use this opportunity to see other players, find the identity, find that style of play, especially now that it is coming towards the World Cup," Shaw said. "Coming up here, playing against a team with a different style, playing against a team that loves the ball helps us to know that sometimes we are going to suffer in different games. And when we are suffering we can think of ways we can approach the game."

It was the first pair of games that the Reggae Girlz have played since qualifying for the World Cup in July after finishing third in the Concacaf Women's Championship.

Midfielder Giselle Washington is also optimistic about the continued shaping of the team with nine months to go before the tournament.

"We bonded a lot and although we didn't get the results we wanted, I think we have learned a lot from this trip. It will help us as we continue our preparations for the World Cup. I am super excited for what's to come," Washington said.