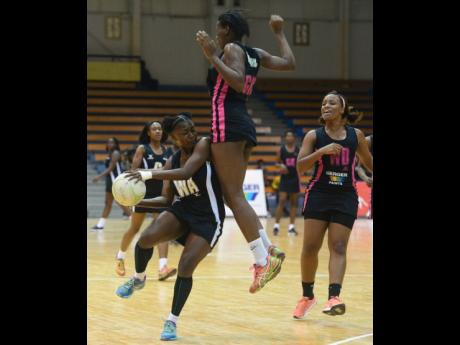 Wing attack Khadijah Williams of Manchester Spurs drives with the ball ahead of an aerial Abbeygail Linton of Kingston Hummingbirds during an Elite League match at the National Indoor Sports Centre in 2019, the last time the competition was played.

The competition has not been played since 2019 because of the COVID-19 pandemic as well as the resultant financial pinch, and, according to vice-president of NJ, Simone Forbes, the Elite League is important as it provides players for the Sunshine Girls.

Forbes is appealing to corporate Jamaica to assist NJ to achieve the $8 million to restart the league.

"This league is extremely important for us. This is the top netball league in the country where the top sixty netball players in Jamaica play in. This is the league where the Sunshine Girls are mostly selected from and so for us to be able to compete against the top teams in the world, the local players who are playing in Jamaica would have to be playing in a league at a level, like that of Suncorp Super League in Australia.

"That is where we want to get to because we want the best local players to be playing every week in a competitive league," Forbes said.

The Sunshine Girls, who are ranked third in the world, won a historic silver medal at the Commonwealth Games in Birmingham, England, earlier this month, with 12 players based in Jamaica.

Forbes, a former national player, pointed out that her organisation is hoping to restart the competition in January once they can secure a sponsor.

"It is extremely important for us to get a sponsor to put on this league that has been on a break for the last three seasons due to the COVID-19 pandemic. We do not have a sponsor at the moment and so we are seeking to find a title sponsor and if we are not able to get that, then we would like to get as many sponsors as we can, where the six teams have a sponsor," Forbes said.

"We are hoping that this can be realised because the start date for this competition is around January 2023," she said.