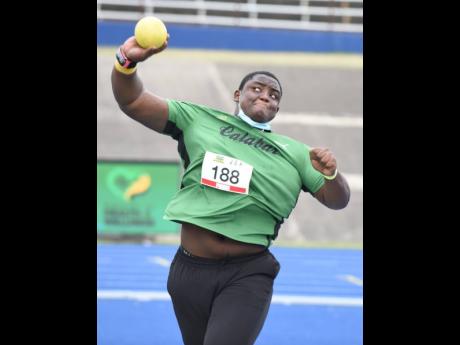 The historic World Under-20 shot put silver won last week in Cali, Colombia, by Kobe Lawrence will inspire others, according to Michael Vassell, the godfather of the local throws' movement.

"This is a landmark achievement and I will say this is a long time coming. This is a dream of mine where I saw that Jamaica can compete on the world stage with everybody," Vassell, who was on coaching duty with the team in Cali, said.

Lawrence threw a personal best distance of 20.58 metres to secure the silver with United States of America's (USA) Tarik O'Hagan taking gold at 20.73 and Tizian Noah Lauria, the latest in a long line of capable German throwers, getting the bronze with 20.55.

Vassell lavished praises on the 18-year-old shot putter and his coach Julian Robinson.

"I tell Julian every time I see him that he has been doing a fantastic job with the youngsters at Calabar and with his seniors and his throwers, especially on the male side have pushed us, Jamaica, into the eyes of the world and it's one of the things I think we can just work together, support each other and keep on moving Jamaica forward," Vassell said.

Asked to put Lawrence's silver in perspective, the man who coached Chad Wright to the 2021 Olympic men's discus final was emotional.

"I think a Bouwaghjie N'Krumie running 10.02 was great for me but seeing that silver and seeing Jamaica finish in front of Germany at a world meet was indescribable," Vassell underscored.

Headed by David Riley, Jamaica won the most medals in Cali, with six gold, seven silver and three bronze.

"The fact that we are now taking teams with people who are competing in throws, jumps and not only on the track shows that I mean, I think the next two years, in Lima, Peru, where the World Under-20 is going to be held, we're going to have so many other youngsters now, who are inspired and motivated by this.

"Not only throwers but also other field event athletes, jumpers, Brandon Pottinger in the high jump final. We are becoming a true powerhouse in track and field," he said.