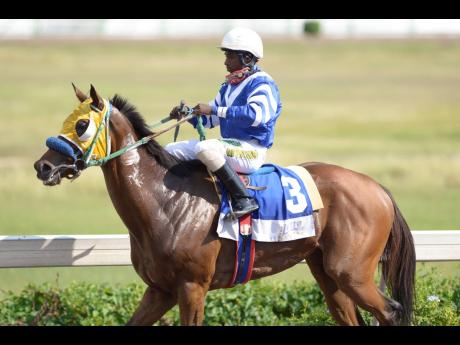 With just over four months to go in the racing year, leading rider Dane Dawkins says he believes that the race for the jockeys' title at Caymanas Park is still wide open.

Dawkins, who has been in excellent form this year, leads the standings with 61 winners, three ahead of defending champion Anthony Thomas. They are followed by Tevin Foster (37), Dane Nelson, who is currently overseas riding in Canada (27), and Dick Cardenas (26).

Dawkins, 28, told STAR Sports that he has been putting in a lot of hard work this season in order to win the championships, because this will certainly help to boost his career.

"The championship is still pretty close, because remember that he (Thomas) is the champion and everybody loves him, and so I just have to do what I have to do to win the title," Dawkins said.

"I need this championship this year and, hopefully, everything will work out for me," he said. "It feels good to be in the lead at this time, and I just hope that I can still get the winning rides and get the job done," Dawkins said.

"I am very fit at the moment and once you are fit, then your mind is going to be very focused and that is where I am right now," he said.

He said winning the Derby is a dream come true.

"I am feeling very happy about it. I still don't know how to explain the happiness that I am feeling inside," Dawkins said.

"I was pretty confident that I was going to win the Derby because of the workout that she did on Sunday (July 31), which was one minute and 25 seconds for seven furlongs," he said. Dawkins added that his confidence is extremely high right now and he already has his sights set on winning the Derby for a second time next year.