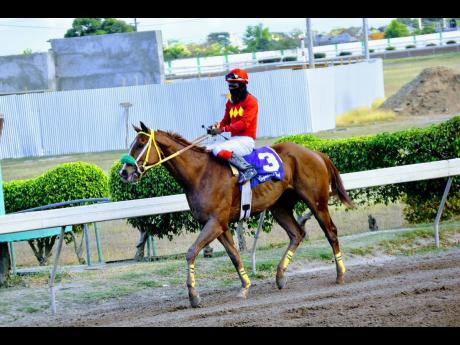 Generational, seen here, is the only real threat to Curlin’s Affair in the overnight allowance at Caymanas Park on Saturday.

CURLIN'S AFFAIR reports ready for work in Saturday's overnight allowance, armed with a doctor's certificate explaining his last-place finish behind JORDON REIGN'S at six and a half furlongs on June 18. The Perfect Curlin-Nuclear Affair colt raced prominently into the straight, turning for home fifth, but surprisingly finding nil in the stretch run, a performance later explained by the vet list - bled.

Returning nine pounds lighter at 117lb, going five furlongs round with a bullet 35.4 for three furlongs under his girth, CURLIN'S AFFAIR should use class and pace to dominate his six rivals at the minimum round trip.

Topweight GENERATIONAL aside, there is no real speed in the event to cause any alarm for a stalker like CURLIN'S AFFAIR, who also has his fair share of pace.

Though clocking 1:12.3 at six furlongs in March, beating RUM WITH ME in a restricted overnight allowance, CURLIN'S AFFAIR's best performance this season was a fourth-place finish in a marker event from which runner-up MAHOGANY and third-place I AM FRED returned to each win two races.

Richard Azan's filly, ARTESIA, is on a hat-trick of wins after taking out non-winners of four races on June 5. A decent run-on sprinter, ARTESIA completed five and a half furlongs in 1:06.0 on a track running fast that afternoon.

T BRADY, runner up to ARTESIA, returned to place third behind PRINCE MARSHALL at nine furlongs on June 18 before running out a two-length winner at six and a half furlongs, also on a fast track, clocking 1:18.4 on June 26.

Though both reporting off wins, T BRADY and ARTESIA could both be left flat-footed when CURLIN'S AFFAIR goes after expected leader GENERATIONAL, who shouldn't last long with topweight 126lb.

CURLIN'S AFFAIR's turn of foot should prove too strong for the closers, ARTESIA, T BRADY and LOOSE BALL, who signalled his return to form by blowing past LIGHTNING MCQUEEN in a $1 million claiming event at five and a half furlongs.