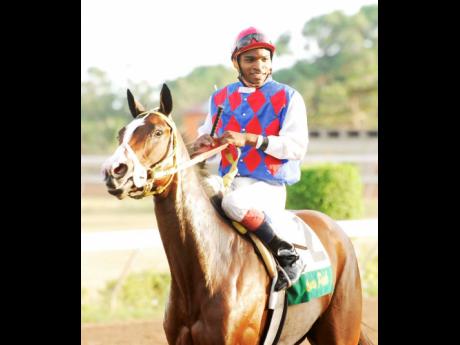 Jockey Andre Martin, pictured here, will be aboard D Head Cornerstone for the Terremoto Trophy at Caymanas Park on Sunday.

D HEAD CORNERSTONE's fourth-place run in the 10-furlong Jamaica St Leger, his sixth outing since debuting in May, confirmed the Bern Identity-Soul of the Heart colt's stamina, which should make him a winner at the distance in Sunday's Terremoto Trophy for non-winners of two races.

Passing the stands after the off, next-to-last, with only RAINSVILLE behind, D HEAD CORNERSTONE was angled inside by Andre Martin and ran a ground-saving race along the rail down the backstretch, moving as a team with POWER on his outside.

Moving smoothly along the rail without posing a threat to the leaders, D HEAD CORNERSTONE quickened inside off the home turn to go fourth, moving ahead of a winded EMPEROROFTHECATS. RAINSVILLE loomed large in fifth two furlongs out but D HEAD CORNERSTONE stayed on best of the rest behind the out-of-class trio of BLUE VINYL, ATOMICA and BRINKS. Holding off Guineas fourth-place MORIMOTO was a major accomplishment for D HEAD CORNERSTONE in his first race against top-class three-year-olds.

Returning among his peers, D HEAD CORNERSTONE will relish every inch of the Terremoto with confident Andre Martin still aboard. There's no holding speed in the event to get away from the Gary Subratie-trained runner, which will allow him to comfortably track whoever decides to lead down the backstretch.

Richard Azan's RAINSVILLE finished five lengths behind D HEAD CORNERSTONE in the St Leger, not showing enough staying power to suggest he is capable of turning the tables.

RAINSVILLE's stablemate, PELICULA, ran a decent third behind SUNSET SILHOUTTE at nine furlongs and 25 yards on June 18. However, RAINSVILLE being entered in the St Leger, instead of the filly, points to stable confidence in the colt going two turns.