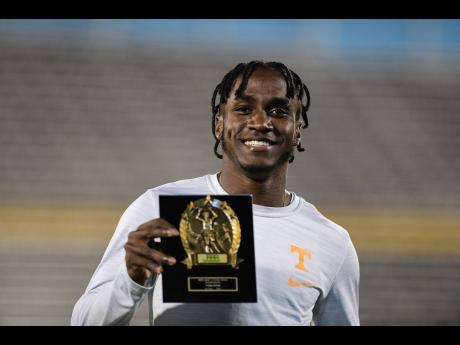 Wayne Pinnock celebrates after winning the men’s long jump event at the JAAA National Senior Championships at the National Stadium in Kingston on Saturday.

Newly crowned national long jump champion Wayne Pinnock said that his perseverance through an injury-riddled campaign was guided by faith, and for his daughter.

Pinnock's opening jump of 8.14m, a personal best, was enough to dethrone reigning world champion Tajay Gayle, who finished second with 7.97. Gayle suffered an injury on his fifth attempt and could not continue. Shawn-D Thompson was third at 7.88.

Pinnock, who competes for the University of Tennessee, has been dealing with multiple injury issues this year, starting from January when he was out for two weeks during the indoor season, and even a strained hamstring later this season. Pinnock said that it was his faith in God and the desire to make his daughter Zahara proud that pushed him towards the title.

"I just did it for her," Pinnock told STAR Sports. "The only thing that was in my mind was that, 'Zahara, I'm going to do it for you.' And I did it. It took one jump.

"Every month, I was always hurting. [But] I put my trust in God and He delivered. It is forever a blessing."

It was a blessing, he says, because that strained hamstring occurred after his winning leap of 8m on June 5 to win the NCAA outdoor title, adding to the indoor crown he won in March.

"After nationals, I strained my hamstring," he said. "I couldn't do anything. I just had to be lifting [weights]. I was worrying because I wasn't feeling right. My hamstring was hurting. But as I told you, it's only God."

While Pinnock has the national title, he fell short of the automatic World-qualifying mark of 8.22m and now faces a nervous wait to see if he will be able to make his first senior World Championships team. Pinnock says extending his season would depend on whether he gets in for the World Championships in Oregon next month or the Commonwealth Games in Birmingham, England, in August.