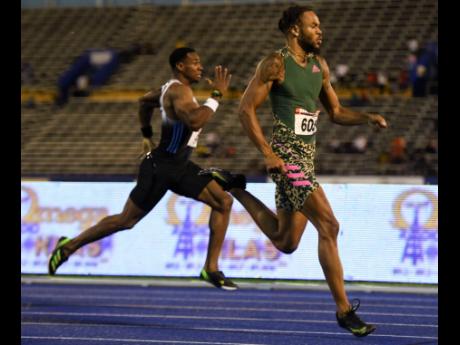 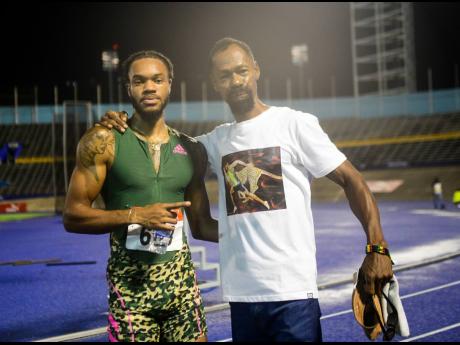 Hudson and his father Andrew Hudson Sr (right) celebrate after the 200m final.
1
2

New national men's 200m champion Andrew Hudson says that his victory was made more special by his father witnessing him compete for the first time on Jamaican soil.

Hudson won in a time of 20.10 seconds while national 100m champion Yohan Blake placed second in 20.31. Nigel Ellis was third in 20.41. Hudson was born in the United States but said he decided to represent Jamaica before last year's national trials. Hudson, who has Jamaican roots through his father, was filled with emotion after his win, happy to have made him proud.

His father, Andrew Hudson Sr, says that he was pleasantly surprised when he decided to switch allegiance, but proud that his son has embraced his heritage on his own.

"He made the decision [to represent] Jamaica on his own," Andrew Sr said. "He said he was going to make the switch and I said 'Great, wonderful!'. I was just hoping for the best. I can't process this until later on. I expected it, but just to see it unfold was amazing. I'm overjoyed and I think he is going to do great for Jamaica."

Hudson Jr said that he is eager to prove himself at the elite level at next month's World Championships.

Jamaica Athletic Administrative Association president Garth Gayle says that Hudson is among the three athletes awaiting approval from World Athletics to make official their switch to represent Jamaica. Gayle said that they were approved to compete at the national championships, and he is optimistic for a prompt response.

"He has applied for the change of allegiance," Gayle said. "We have three athletes who have written to us and we would have presented their documents (to World Athletics), as they would have completed all the necessary requirements to participate in our championships. We now await the approval."