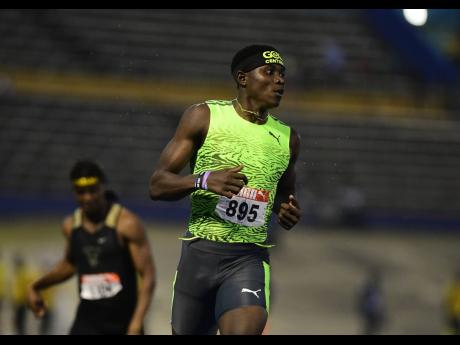 Sandrey Davidson looks to the clock to see that he became the 200m champion in 20.84 seconds at the JAAA National Junior Championships at the National Stadium in Kingston last night.

"I am very happy with my performance," he said. "I came into this championship with the mindset to win the sprint double and I got it, so I just want to thank my coaches, my family, and friends for the support."

Calabar's Dishuan Lamb clocked 13.42 to turn back the challenge of St Jago's Jahvel Granville to win the boys Under-20 110m hurdles event. Granville was second in 13.48 while third went to his teammate Demario Prince in 13.60.

St Elizabeth Technical's Barrain Smith got the better of his teammate Adrian Nethersole to win the boys Under-20 800m in 1:53.31 minutes. Nethersole was second in 1:54.37, while third went to Trevone Prince of Jamaica College in 1:56.74.