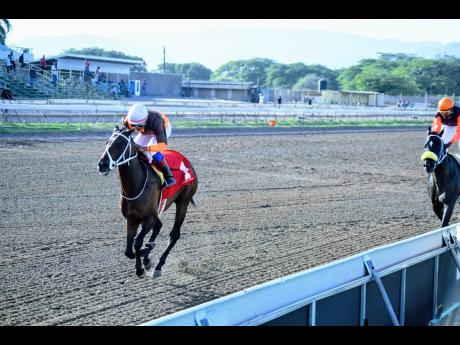 EROY's third-place run with topweight 126lb, off a five-month break, allowing DOUBLE DIVA 14lb, makes him awfully hard to beat at seven and a half furlongs in the Hubert Bartley Memorial on Sunday.

Unraced since toppling FURTHER AND BEYOND at the exact trip last November, EROY appeared an enticing bet when returning down in class among overnight-allowance runners a month ago.

However, punters who dived in with EROY at odds of 9-5 didn't take into account DOUBLE DIVA running light at 112lb, or the fact that Richard Azan's runner doesn't like sustained pace, factors which caused him to be run off his legs by a fellow United States-bred, who was chalking up her fourth consecutive win.

Breaking from post-position one with Dick Cardenas, EROY should toy with his slower rivals before injecting the quality pace, which won him two open-allowance races at the back end of last season. Last month's pipe-opener against DOUBLE DIVA would have done him a world of good, complementing his superb form at exercise.

MONEY MONSTER, who grabbed second from EROY at the wire, returned June 11 to upstage AWESOME TREASURE, MINIATURE MAN and AMY THE BUTCHER at a mile with a convincing two-length victory while carrying near-topweight 123lb.

AWESOME TREASURE, MINIATURE MAN and AMY THE BUTCHER are back seeking redemption. However, EROY not only represents MONEY MONSTER, he is allowing the trio less weight than he afforded leagues-better DOUBLE DIVA, who he gave a run for her money to the final furlong in torrid splits of 34.2, 46.1, 58.2 and 1:11.1.

MONEY MONSTER replicated those splits to take out AWESOME TREASURE, MINIATURE MAN and AMY THE BUTCHER in one swoop. Running nine pounds lighter than EROY, MONEY MONSTER had to pay his respects and await Azan's runner burning himself out before grabbing second at the wire.

EROY's pace should prevail. He's down in class via the condition booklet, not ability, and only had the bad fortune of allowing DOUBLE DIVA too much weight off the break on last.