Atomica to blow away boys in 1000 Guineas 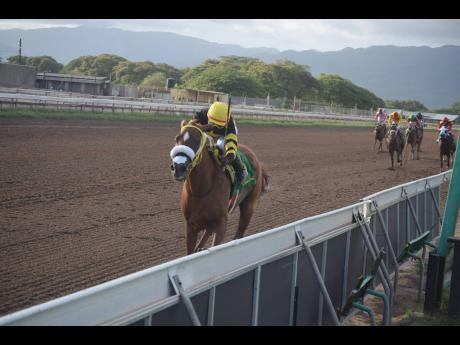 ATOMICA, with Dane Dawkins aboard, wins The Portmore at Caymanas Park, in Portmore, St Catherine, on Saturday, May 7.

ATOMICA's races have turned into 'watch' events, pundits taking stock of the times Gary Subratie's filly has been posting, comparing her Thornbird and Portmore Stakes clocking to the colts' and geldings' Prince Consort and Kingston runs, summing up how she could fare against the boys in the 12-furlong derby.

If her six-length win in the seven-furlong Thornbird Stakes was easy, her 10-length romp in the Portmore at seven and a half furlongs was a mere rehearsal for Saturday's 1000 Guineas at a mile. Subratie hasn't even bothered to ask much of the Nuclear Wayne-Honkeytonkville speedster, 1:16.2 for six furlongs out the mile chute, knocking back almost three seconds off the 1:13.3 she had galloped ahead of the Portmore.

ATOMICA's 1:27.0 in the April 2 Thornbird Stakes equalled EMPEROROFTHECATS' time against the boys a day later in the Prince Consort. She followed with 1:32.3 in the Portmore, faster than BLUE VINYL's 1:32.4 in the Kingston, dismissing any thoughts of opposing her in the fillies' Guineas.

ATOMICA will get her chance against the boys in the July 2 St Leger at 10 furlongs after which Subratie and Don Wehby's Oakridge Farms will face the same fork in the road that SHE'S A WONDER had to navigate last season - keep right for the August 6 Jamaica Derby at 12 furlongs or left for the 10-furlong Oaks scheduled a day later.

SHE'S A WONDER had taken the Oaks route after finishing third behind CALCULUS and FURTHER AND BEYOND in the St Leger, easily beating her peers and collecting the bird in hand instead of facing the colts again in the derby.

ATOMICA's date with derby destiny will, of course, depend on whatever happens in the St Leger in a month's time, not the Guineas formalities of this weekend.