God Of Love ready to dominate 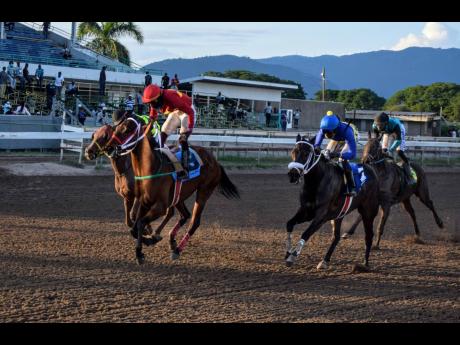 God Of Love (left), ridden by Robert Halledeen, wins the Gerry Skelton Memorial Trophy ahead of One Don(right), over five and a half furlongs at Caymanas Park in St Catherine on Sunday, November 28, 2021.

PREDICTABLY made to look inferior by MAHOGANY two weeks ago, GOD OF LOVE returns among overnight-allowance company, non-restricted, hunting a repeat of his November 28 win at the level when landing the Gerry Skelton Memorial at five and a half furlongs.

All primed to romp on May 7, GOD OF LOVE galloped six furlongs in 1:13.4 the previous Sunday but MAHOGANY popping up on the overnight programme, beaten in 1:05.2 for five-and-a-half by RUNAWAY ALGO, off a lay-up with topweight, must have jolted his connections into accepting their fate.

MAHOGANY, who belongs nowhere near overnight allowance once in tip-top shape, ran a private race with 123lb, clocking 1:11.1 for six furlongs, which topweight GOD OF LOVE chased to about a furlong and a half out, getting rid of BILLY WHIZZ, before lightweight RAS EMANUEL tackled him to claim the runner-up spot by a length and three-quarter.

Returning with topweight 126lb at five furlongs round, GOD OF LOVE has no MAHOGANY to fear but Jason DaCosta has a dangerous tag team, LURE OF LUCY and MINIATURE MAN, which must be respected.

LURE OF LUCY, who had placed a creditable sixth behind RUNAWAY ALGO off a four-month lay-up, finishing five lengths behind runner-up MAHOGANY, showed her hand last Saturday, disputing the lead with FATHER PATRICK and DUKE off the home turn, before her stablemate, 9-1 shot KING ARTHUR, ran through along the rail with Omar Walker to surprise the sprinters at six furlongs.

Though LURE OF LUCY was ridiculously light, possibly 98lb with claiming rider Jordan Barrett, she is five pounds lighter than GOD OF LOVE, who she will be asked to keep honest from the word go, setting the stage for MINIATURE MAN, who reports with 112lb.

MINIATURE MAN getting 14lb from GOD OF LOVE, with assistance from LURE OF LUCY, makes last year's 2000 Guineas winner a dangerous closer after his sneaky ninth-place run off a 10-month break behind MAHOGANY on May 7.

Running at odds of 19-1, MINIATURE MAN had to be steadied inside the first half-furlong between DEN STREET and RAS EMANUEL before being taken out wide by Omar Walker, but was never far off the bunch being outclassed by MAHOGANY.

After straightening five wide, MINIATURE MAN held his own, sixth a furlong out, until eased by Walker inside the last half-furlong. DaCosta summoning first-call Anthony Thomas to partner MINIATURE MAN at 112lb, while assigning claiming Romario Spencer to clip five pounds off LURE OF LUCY, exposes the leading barn's plans.

As KING ARTHUR proved last Saturday, a light, in-form and down-in-class classic winner is dangerous at any trip. GOD OF LOVE, though he is the proven sprinter in the 10-horse field, still has to put every foot right to slip DaCosta's tag team.