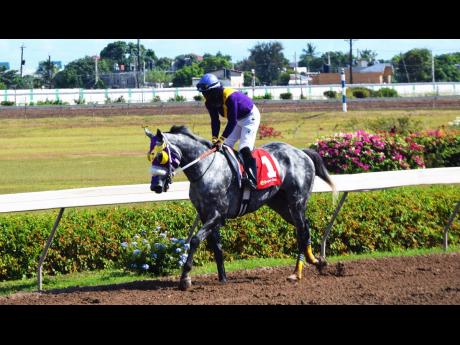 Duke, with Robert Halledeen aboard.

DUKE's modus operandi of firing off two or three wins in a row should land him his second race in a month, taking on six rivals in Saturday's Lady Geeta Trophy at six furlongs.

Since logging a hat-trick of wins in little under a month late last season, DUKE went into hibernation against stakes runners in five outings, unplaced only once, before waking up on his second run down in class among open-allowance company, slamming SECRET IDENTITY and NUCLEAR NOON at six furlongs on April 17.

Returning with seven pounds in his favour against an old rival, Ian Parsard's FATHER PATRICK, off-colour and burdened with topweight 126lb, DUKE, who won by nearly four lengths in 59.1 at five furlongs round on last, is still in a sweet spot facing four runners from Jason DaCosta's barn and non-sprinter DOUBLE CROWN.

DaCosta's KING ARTHUR, HOVER CRAFT and EAGLE ONE are all begging for longer trips whereas their stablemate, LURE OF LUCY, though reporting light at 101lb with Jordan Barrett, only returned from a near five-month lay-up a day after DUKE's impressive victory, beaten into sixth-place by RUNAWAY ALGO at five and a half furlongs.

Though runner-up MAHOGANY came out of that race to destroy rivals in 1:11.1 in a six-furlong sprint on May 7, LURE OF LUCY is up in class, against open-allowance winner DUKE, after finishing down the track on her return against overnight-allowance runners.

FATHER PATRICK, the horse who ended DUKE's win streak last December, beating him twice that month, has looked way below himself in two starts this season, trailing in March 5 behind PATRIARCH at five and a half furlongs, and returns off a two-month lay-up.

Dane Dawkins, who won six races in two days last weekend, including ATOMICA in the Portmore 1000 Guineas prep, returns aboard DUKE for Gary Subratie after a smooth victory last time out.