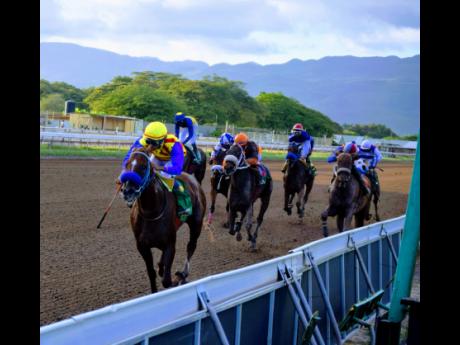 PATRICK Lynch's BLUE VINYL made amends for his April 3 Prince Consort Stakes near-miss with a commanding victory in yesterday's Kingston 2000 Guineas prep, turning the tables on EMPEROROFTHECATS, who tried to make all but quit under topweight 126lb early in the stretch run to finish fourth, exposing his glass chin at a distance of ground.

Reporting 11lb lighter than EMPEROROFTHECATS, after failing by a short head to overhaul the speedster when slowly away and sitting level at 121lb in the seven-furlong Prince Consort Stakes, BLUE VINYL showed his appreciation for an April 23 six-furlong sharpener by disputing the lead with his rival down the backstretch.

NOMOREDEALS, a 43-1 outsider, who had outfinished BLUE VINYL for second at six furlongs, both beaten by importee LUKSOL after the Prince Consort, joined the fray on the lead, chasing EMPEROROFTHECATS into the lane.

However, an easy-going BLUE VINYL rode the rail into the straight and accelerated quickly off the home turn to hit the front a furlong and a half out before being challenged by PERFECT BREW, who also made his bid coming off the home turn.

BLUE VINYL quickened impressively under Raddesh Roman to open up on PERFECT BREW, last year's Jamaica Two-Year-Old Stakes runner-up, pulling clear to win the seven and a half furlong event by three and a quarter lengths in 1:32.4.

Owned by M.N.M Racing Stable, BLUE VINYL's 4-1 victory puts the Bern Identity-Blufield colt in pole position for the 2000 Guineas at a mile on June 5. Ian Parsard's THE CITADEL, who also went off at 4-1, was slowly away from post-position two with leading rider Dane Dawkins, straightened wide and suffered late interference when closing late along the rail to finish eighth in the 13-horse field.

Dawkins closed the weekend of racing with a two-timer, his sixth in two days, moving to 33 atop the jockeys' standings, two clear of Anthony Thomas, who fell aboard DEEZI in the feature. Dawkins rode back-to-back winners - 1-5 favourite DODGE THIS LINK and 10-1 outsider ITIZ WHAT ITIZ - in the third and fourth events, respectively.

Racing continues on Saturday ahead of a Labour Day weekend triple-meet treat, May 21, 22 and 23.