Don’t sleep on The Citadel 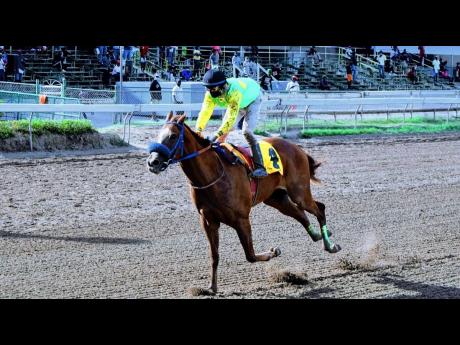 The Citadel, with Dane Nelson aboard.

EMPEROROFTHECATS has a mammoth task at 126lb in Sunday's Kingston, allowing too much weight for his own good, going a half-furlong longer, after hanging on by a short head to beat BLUE VINYL at seven furlongs in the Prince Consort Stakes.

Benefitting from BLUE VINYL's poor start, EMPEROROFTHECATS just got home under a confident ride from Bebeto Harvey, who has been replaced by Andre Martin, trainer Carl Anderson calling in the Canada-based rider, whose most famous win was stealing the 2009 Superstakes from in front with 52-1 shocker HOMBRE.

Wary of EMPEROROFTHECATS' ability to stay the Prince Consort trip, Anderson had ditched the blinkers in which the Emperor Hall-Laws of the Cat had won at five furlongs straight two weeks earlier. The decision to do so paid off as EMPEROROFTHECATS battled bravely when BLUE VINYL came calling along the rail with Dane Nelson.

Anderson has added a tongue tie to EMPEROROFTHECAT's arsenal, an insurance policy against the gelding flipping his palate and choking up when the heat is switched on by lighter rivals, who will be attacking from the word go. However, EMPEROROFTHECATS appear belled by the handicaps.

BLUE VINYL has an 11lb swing on EMPEROROFTHECATS out of the Prince Consort Stakes. BRINKS might have trailed in behind EMPEROROFTHECATS after racing prominently down the backstretch. However, his 12lb swing will make a significant difference to the pace, especially with unbeaten stablemate, THE CITADEL, lurking along the rail with 117lb.

PERFECT BREW, who had missed the Prince Consort but returned three weeks later to place second behind United States-bred MADELYN'S SUNSHINE at five furlongs round, is another quick runner who is expected to be in the pickle, carrying 115lb, 11lb lighter than EMPEROROFTHECATS.

The handicaps of the Kingston make a sure recipe for a collapsing pace, which will suit the trio of THE CITADEL, BLUE VINYL, and POWER, who won strongly at a mile with Omar Walker on April 17, clocking 1:40.4.

BLUE VINYL returned two Saturdays ago wearing blinkers and was outfinished at six furlongs by LUKSOL, placing third, unable to get by early leader NOMOREDEALS, who ran a vastly improved race with a visor fitted.

Patrick Lynch has removed BLUE VINYL's blinkers, which makes him a lethal closer with 115lb. However, THE CITADEL had BLUE VINYL's ticket the first time they met back in February and returned a month later to stamp his class on non-winners-of-two at seven and a half furlongs.

A May foal, Parsard has been handling THE CITADEL with kids' gloves, bypassing the Sir Howard and prince Consort Stakes in favour of gallops such as beating experienced imported stablemate CLASSICAL ORB at exercise early last month.

THE CITADEL might not jump off the pages of the form book, especially his exercise reports. However, he had zipped past LUKSOL at the top of the lane last time out, the seven-furlong split in 1:26.4, before running out an easy winner.