I Am Fred for World Vet Day Trophy 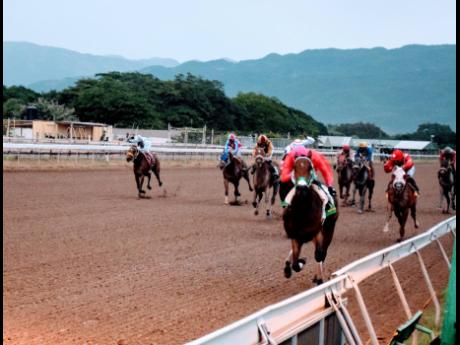 I Am Fred, with Phillip Parchment aboard, at Caymanas Park on Saturday, December 4, 2021.

I AM FRED's never-say-die qualities were on full display last time out, winning a heated stretch battle with CURLIN'S AFFAIR to secure third in the fast-run Easter Sprint Cup won by RUNAWAY ALGO, who turned back off-the-break MAHOGANY in 1:05.2 at five and a half furlongs.

The trip was at least a furlong short for Jason DaCosta's I AM FRED, not to mention him sharing topweight 126lb with MAHOGANY, both allowing RUNAWAY ALGO nine pounds. Though having the distance and handicaps against him, I AM FRED turned in his usual workmanlike performance to repel CURLIN'S AFFAIR by a half-length.

Getting within three-quarter length of runner-up MAHOGANY, a length and a half behind quick RUNAWAY ALGO, speaks volumes of I AM FRED's chances, running five pounds lighter at a mile in Saturday's World Vet Day Trophy.

CURLIN'S AFFAIR returns at the exact weight, 119lb, swinging five pounds in I AM FRED's direction, even though he was a half-length behind the foreigner at the finish. Both were impressive winners of their previous races with topweight 126lb. However, I AM FRED has to be given the advantage at the distance and reduced handicaps.

A crack middle-distance runner, I AM FRED clocked 1:33.3 on December 4, beating EXCESSIVE FORCE and LEGALITY at seven and a half furlongs in an overnight allowance while CURLIN'S AFFAIR was making his way through the ranks, completing a hat-trick against non-winner-of-four on January 22.

Making his overnight allowance debut on February 6, CURLIN'S AFFAIR ran smack into LEGALITY at seven furlongs and was turned back by his former stablemate, who had been sacrificed on a $750,000 claim tag by Anthony Nunes on December 23 in defence of his trainers' title.

CURLIN'S AFFAIR was only two pounds heavier than LEGALITY, who was blown away by I AM FRED three Saturdays prior. It should be noted that EXCESSIVE FORCE has won twice, the latest being last Saturday, since losing to I AM FRED in December.

Nunes has SPARKLE DIAMOND in the event, hoping the United States-bred speedster can drag I AM FRED off his bridle, allowing CURLIN'S AFFAIR to make a sweeping move, similar to how he had pounced on RUM WITH ME at six furlongs.

However, SPARKLE DIAMOND has seemingly lost his lustre, doing absolutely nothing at exercise, which won't help him against horses who dipped under 1:06.0 when last out.

Gary Subratie's SENTIENT has also been off-colour, watching stablemate ATLANTIC BLUE race ahead of him into the lane in his last two races. Similar to SPARKLE DIAMOND, SENTIENT's workouts do not inspire confidence, spending the first week of April in the equine pool.