No threat for Further And Beyond in Viceroy Trophy 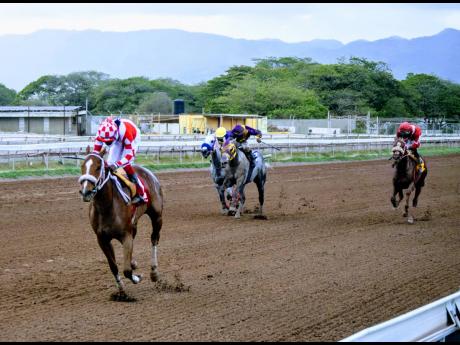 Further And Beyond, with Robert Halledeen aboard, leads the chasing pack in the St Cecelia Cup at Caymanas Park on Saturday, April 2.

BLESSED with a turn of foot last exhibited by She's A Maneater, backed by a powerful stretch run, FURTHER AND BEYOND won't be easily beaten in one-kick races such as Saturday's Viceroy Trophy at a mile.

The weight swings against FURTHER AND BEYOND, out of the Saint Cecelia Cup, might appear significant on paper - I'VE GOT MAGIC getting an additional seven pounds, KING ARTHUR shedding 14lb and EXCESSIVE FORCE similarly in receipt of 14lb due to his claiming rider.

FURTHER AND BEYOND's crippling three-furlong move in the Saint Cecelia Cup took the Horse of the Year from seventh to first within a furlong, swatting I'VE GOT MAGIC off the lead at the top of the lane, before powering home by a widening three-and-a-half length margin.

They were all outclassed when Robert Halledeen shifted into third speed leaving the three and getting smaller in the rear-view mirror by the time he geared down at the winning post.

December's Ian Levy Cup at eight and a half furlongs was a similar display, a three-furlong kick, which dislocated the field in a six-length victory over CALCULUS, who simply couldn't cope with a mile split of 1:36.1.

FURTHER AND BEYOND's last two victories, both with topweight 126lb, cemented the four-year-old colt as the country's top handicapper, certainly in races out of the mile chute. The quality of FURTHER AND BEYOND's Ian Levy victory, 1:43.2, can be measured against the best times at the trip in the last two seasons - a lowering of NIPSTER'S 2020 stakes record by a fifth, two-fifths shy of MAHOGANY's 1:43.0, clocked in August that year.

His rivals, the likes of two-turn specialist CALCULUS, will have to await the round course, and the right handicaps to lower his colours.