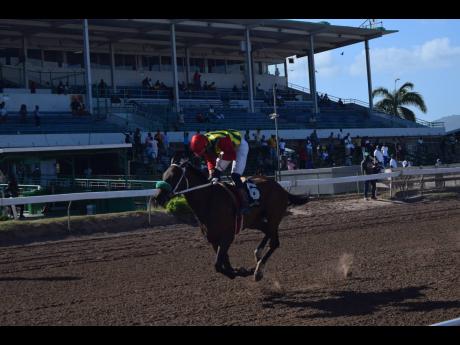 Nefertari wins the sixth race at Caymanas Park, with Linton Steadman aboard, on Saturday, March 12.

NEFERTARI and SILENT MISSION both had mishaps at the gate last time out. Only one got away with it. This time around, there will be no room for error when the fillies from rival barns line up in Sunday's Simply Magic Cup at a mile for non-winners of two races.

Anthony Nunes' NEFERTARI threw more than a scare on debut, almost dwelling at the start, hopelessly tailed off as the even-money favourite, her name mentioned possibly once down the backstretch while the race-caller and patrol camera focused on the leaders.

Up to a furlong out, especially for punters off track, the only indication that NEFERTARI had hit overdrive on the wide outside was a shadow in mid-track, before the announcer himself spotted her. Before he could say, "Nefertari", she was already ahead of MILA'S ALL THAT and being eased by Linton Steadman.

However, the time of the race was a crappy 1:23.2. MILA'S ALL THAT flopped last Saturday on his return, finishing five lengths behind SUPREME SONG, who outfinished GET A PEPSI in a driving finish but a slow 1:15.1 at six furlongs.

Nevertheless, NEFERTARI has been keeping quality company at exercise, galloping six furlongs with FURTHER AND BEYOND out the mile chute, clocking 1:15.1 to the Horse of the Year's 1:15.0, a workout which should take her home against non-winners-of-two.

What's odd is that Nunes, up to her last published workout, hasn't taken NEFERTARI back to the scene of the crime, the starting gate. Whether that's overconfidence will certainly be tested against experienced runners, colts and geldings included, plus the likes of SILENT MISSION, who has much to gripe over after a stinker of a start in the Thornbird Stakes.

Reporting off a four-and-a-half month lay-up in the March 12 six-furlong Hot Line Stakes, SILENT MISSION was predictably outsped by PRNCSSHOOTINGSTAR. Though she ran into a titan, ATOMICA, in the seven-furlong Thornbird Stakes on April 2, SILENT MISSION ran a helluva race for third.

OUTBIDDER's swerve at the start forced ATOMICA onto SILENT MISSION, who, while being steadied, was almost brought down by PRNCSSHOOTINGSTAR. Straightening almost last, SILENT MISSION made good headway against the rail to finish third, a length and a quarter behind runner-up GOLDEN WATTLE, who couldn't have asked for a better race but was simply no match at the distance for speedy ATOMICA.

SILENT MISSION had worked really well for the Thornbird Stakes, 1:14.4 for six furlongs, alongside stablemate DEEZI, the same morning NEFERTARI posted 1:15.1, certainly not a workout to be scoffed at.

NEFERTARI's victory was a brave run but gate habits aren't to be easily dismissed until proven otherwise. SILENT MISSION's Thornbird Stakes run is more than meets the eye.

The Simply Magic Cup is no open-and-shut case, especially with fillies pitted against colts and geldings. In-utero POWER finished a decent fourth behind EMPEROR OF THE CATS in the Prince Consort Stakes. GIANT WHEELER, BILLY WHIZZ' brother, looked improved when getting off the mark without blinkers last out and could enjoy a mile.