Nunes set to hit back in trainers’ race 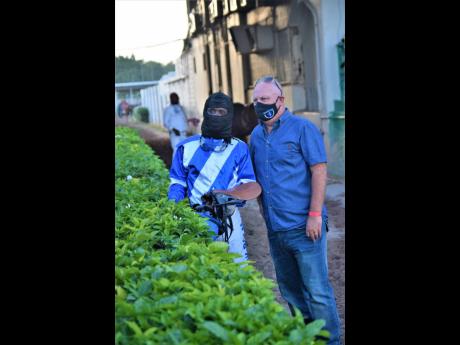 ANTHONY Nunes and Jason DaCosta have started their seesaw battle atop the trainers' stakes standings after going down to the wire last season.

Nunes, who sealed a third straight title with GOLDEN WATTLE's upset victory over colts and geldings in the Jamaica Two-Year-old Stakes on the last day of the year, poked his head $123,535 in front heading into last Saturday's meet.

DaCosta responded with a three-timer, which pushed him almost a $1 million clear, $928,285, putting runs on the board for Nunes to chase on the first of three consecutive meets this weekend.

Nunes, who had one winner in response to DaCosta's onslaught last week, should open his innings with EL CID at nine furlongs and 25 yards in the first race. Runner-up in his last two races, EL CID should have no problems at the distance against familiar rivals.

A bit one-paced, EL CID failed to respond when SALUTE THE DEPUTY rallied against the rail in upper stretch under Trevor Simpson to outfinish him at a mile three weeks ago. Determined to have the Soul Warrior-Wap gelding concentrate on racing, after losing his previous race by a head to THIRTYONEKISSES, Nunes has ditched the cheek pieces for a visor in which EL CID cantered last Saturday morning, apparently to his trainer's liking.

Though his times suggest he's a moderate sort, EL CID has a good turn of foot when asked to make a bid and stays on in his races, qualities which should serve him well on the route course with no holding speed to fear.

Should he rake in the lion's share of the $920,000 maiden purse at the top of the nine-race card, Nunes will zoom in on the Jamaica Racehorse Owners' Association Trophy million-dollar purse with SUPREME SOUL, who ran a brave race for second after recently returning to his barn from Gary Subratie.

Ironically, it was Subratie's CRIMSON who beat SUPREME SOUL at a mile on March 27. Running in the blinkers out of his old barn, SUPREME SOUL tried bullying the race from in front, knotting up on the lead with ATLANTIC BLUE, before CRIMSON pounced in the stretch run to win by two and three-quarter lengths in 1:39.0.

Despite being overpowered by CRIMSON, SUPREME SOUL was clearly second-best and looked somewhat livelier than his previous start under Subratie when beaten 12 lengths by DOUBLE CROWN in a slow 1:41.3 in January.

Should he repeat his New Year's Day run at the distance behind former stablemate AWESOME TREASURE, SUPREME SOUL should have Nunes snapping at DaCosta's heels by day's end.