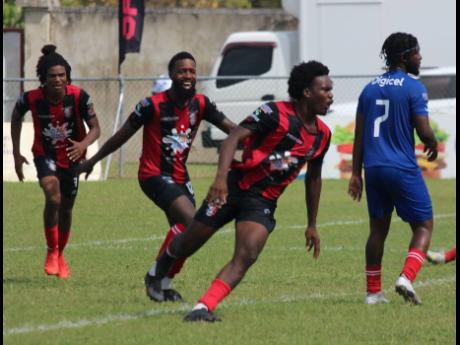 Arnett Gardens goalscorer Luca Kong (second right) runs away from his teammates after opening the scoring against Dunbeholden in their Jamaica Premier League match at the Drax Hall Sports Complex in St Ann on Monday. 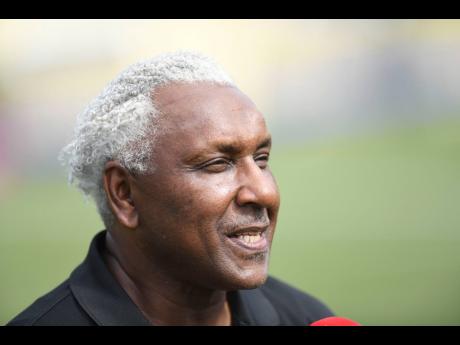 A change of scenery may have been what was required to finally get Tivoli Gardens off the mark for the season. After struggling in their first five games in Kingston, they went to Drax Hall, St Ann and took their first win, thanks to Stephen Barnett's 31st-minute strike. With a rebuild in the works with key players departing, the win will be a boost to those efforts in what they hope will be the beginning of a surge up the standings.

Only Mount Pleasant have had a longer unbeaten run (seven games) so far in the Jamaica Premier League (JPL) than Arnett Gardens but the West Kingston-based club is finding ways to keep pace with the top of the pack this year. The bench provided the offensive spark needed as substitutes Luca Kung and Damari Deacon each scored to give Arnett a 2-1 win over Dunbeholden. They are now unbeaten in six games with a three-game winning streak, with 14 points just three points shy of leaders Mount Pleasant (17).

Cavalier have much to be cheerful about this week. First, they enjoyed a comfortable 3-0 win over Montego Bay United and second, they managed to keep 11 players on the field this time. The latter should be a relief for technical director Rudolph Speid who has had difficulty with his team's discipline so far in this campaign, whether from his perspective it is deserved or not. But with their third win in their last four games, they are slowly moving up the table and putting themselves in a position to launch a bid for the top two.

With the last kick of the game, Portmore United's Shai Smith's clever back-heel ended a three-game winless run and got them back on track, defeating Vere United 2-1 at Drax Hall. With patience still being preached for his young team, Portmore head coach Lenworth Hyde will be a relieved man after their recent struggles with an opportunity to vault fourth up the table with bottom club Montego Bay United their next opponents.

In his post-game interview after Montego Bay United's 3-0 defeat to Cavalier, technical director Ricky Hill gave no indications of leaving the club. But, reportedly, he has done just that, tendering his resignation after just three months on the job. Montego Bay United's return to the JPL has been anything but smooth, with only one win in their first seven games, resulting in the first administrative casualty of the season.

The fact that Vere United was stunned by a late game winner in its 2-1 defeat to Portmore United was not the only reason that frustrated head coach Donovan Duckie. What drew his ire the most was the way the goal was conceded, a poor giveaway in their own penalty area which led to Shai Smith's back-heel with the last kick of the game. After a solid win over defending champions Cavalier last week, this week's effort was a disappointing follow-up.

Dunbeholden goalkeeper Damion Hyatt could not stop his former club Arnett Gardens from finding the back of the net, as they lost their second game of the season 2-1. It is a three-game unbeaten run stopped but they have been known so far to mount great responses to defeats this season. They have the opportunity to make a statement on Monday when they face champions Cavalier.

Molynes United goalkeeper Peter Harrison did all he could to keep Tivoli Gardens at bay, but end in end, the offensive did not give him much support as they lost 1-0. Had they managed to get a point from it, it would have been worthy of a man-of- the-match performance. Molynes United's struggles continue, however, having now lost four out of their last five games.