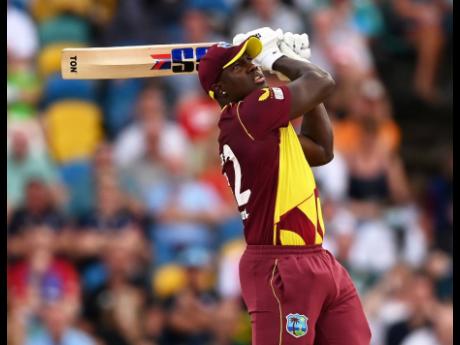 West Indies batsman Rovman Powell in action against England during their third Twenty20 International match at the Kensington Oval in Bridgetown, Barbados, yesterday.

Jamaican batsman Rovman Powell could not hold back his elation after scoring his maiden Twenty20 century, which helped to propel the West Indies to a 20-run win over England in the third international at the Kensington Oval in Barbados yesterday.

Powell, who came into the side in place of compatriot Odean Smith, hit a masterful 107 from 53 balls to help the Windies post a formidable total of 224 for five in their allotted overs.

Romario Shepherd then claimed three wickets while captain Pollard snared two to help restrict England to 204 for nine to seal the win which now sees the hosts leading the five-match series 2-1.

Undoubtedly, the star of the show was Powell, who secured the Man-of-the-Match award for his willow weaving exploits which included four fours and 10 sixes.

The right-hander, who came into the number four position, shared a crucial 122-run third-wicket stand with vice-captain Nicholas Pooran, who made a valiant 70 from 43 balls with four fours and five sixes.

For Powell, the runs have come at the opportune time.

"This one means a lot because the last six or seven months have been tough, as I wasn't scoring a lot of runs," he said. "It's good for me to get an opportunity, which I took."

After watching from the sidelines in the previous two encounters, Powell said captain Kieron Powell hinted to him that he may get a chance to bat at number four and that conversation, he said, propelled him into work mode.

"The night before the game, the skipper told me it's a possibility I would bat at four and immediately I started playing back some good innings that I had in my head," he said. "While doing that, I came up with a game plan and that plan served me well."

The West Indies can look to secure the series win when they take on England again on Saturday, and Powell is hoping for yet another stellar performance for the regional side.

"I hope this innings is a breakthrough international performance," he said. "It's just for me now to go back to the drawing board and think about the stuff that I did right and, hopefully, I can repeat it come Saturday."

R Shepherd not out 11

*K Pollard not out 9

A Rashid run out 1

T Mills not out 1

R Topley not out 2