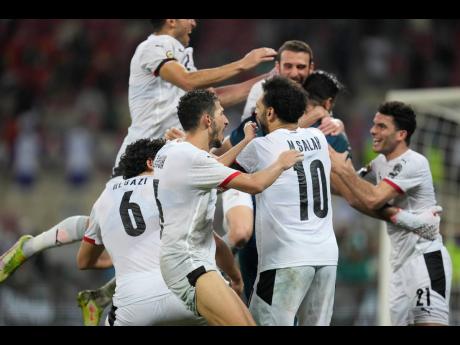 Egypt’s captain Mohamed Salah (centre) celebrates with teammates after scoring the winning penalty in their African Cup of Nations 2022 round-of-16 match against Ivory Coast at the Japoma Stadium in Douala, Cameroon, yesterday.

Mohamed Salah buried the decisive penalty as Egypt beat Ivory Coast 5-4 in a shootout to reach the quarterfinals of the African Cup of Nations yesterday.

Equatorial Guinea followed suit to beat Mali 6-5 on penalties, but in a far more chaotic shootout.

There was then a VAR check to make sure Owono hadn't come off his line too early before the upset was confirmed and Equatorial Guinea's players could race away to a group of their fans in the stadium to celebrate.

Both games ended 0-0 after extra time and the round of 16 ended without a goal from open play.

For Egypt, Salah sent his spot kick into the bottom right corner and then ran off and jumped on to the back of Egypt substitute goalkeeper Mohamed Abou Gabal for his celebrations.

The Egypt keeper pulled off the only save of the shootout when he tipped Eric Bailly's penalty on to the crossbar and out. Abou Gabal, who wears the name Gabaski on the back of his jersey, had come on as a substitute in the 88th minute when Mohammed el-Shenawy was injured.

Gabaski pulled off another crucial save in extra time with a full-stretch dive to keep out a shot from Ibrahim Sangare that was destined for the top corner.

Egypt set up a North African derby against the Moroccans, and Salah's hopes of a first major title with his country are still alive.

Egypt are a record seven-time African champion but hasn't won the Cup of Nations since 2010, when Salah was a teenager. He made his debut for his country the year after. Salah lost in the final with Egypt in 2017 and was part of the team that was surprisingly eliminated on home soil in the last 16 in 2019.