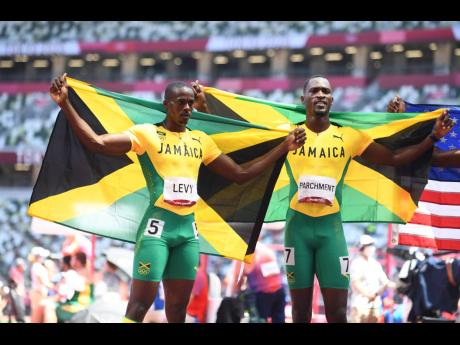 Jamaican sprint hurdler Hansle Parchment showed his ability to adjust in the moment as he delivered a stunning gold medal-winning run in the 110 metres hurdles final at the Tokyo 2020 Olympic Games this morning (Tokyo time), as Ronald Levy took the bronze in an impressive Jamaican 1-3 inside the Tokyo Olympic Stadium.

Parchment, 13.04 seconds, got the better of American star Grant Halloway, 13.09, who had not lost a race since August last year, with national champion Ronald Levy, 13.10, finishing fast to claim the bronze medal.

The results took Jamaica to seven medals at the Games so far - three gold, one silver and three bronze.

Parchment, who faced Halloway in all three of his races here, said he took the opportunity to examine his opponent and found a crack in his armour after their semi-final run, which Halloway won, like he did in the heats.

"Trust me, I did a lot of tweaking. I don't know if you guys noticed, but every run was a different start, because after the first one and I saw that Grant (Halloway) was almost at (hurdle) two when I was just getting up to one, I realised that if I'm going to beat this guy, I had to change something," Parchment told STAR Sports.

The change came about after consulting with sprinters Tyquendo Tracey and Julian Forte, who helped him with foot placement and his positioning in the starting blocks, which led to what he considers his best start, which kept him close to Halloway, before overtaking and pulling away from the American.

"I knew I needed to set up myself a little bit better so I could get closer to him towards the end. The changes worked I think," said Parchment.

Having missed a lot of track work this season due to injuries - in fact, his first race at the National Trials in June was only his third race of the season, Parchment says it was his experience and mental fortitude that helped him to the top of the podium.

"I feel it helps with keeping level-headed, keeping my composure. It's all about who is more focused, who wants it more, who keeps the technique together and I think the experience over the years, helped me a lot," he said.

The gold is an improvement on the bronze medal he won at the London 2012 Games. Parchment also won silver at the 2015 World Championships in Beijing, China.

His win ensures that the Olympic 110-metre hurdles gold remains around the neck of a Jamaican, following Omar McLeod's success at the 2016 Rio Olympic Games.

McLeod sent congratulations to his countrymen via Twitter: "Big congrats to Hansle Parchment and Ronald Levy. The crown stays home."