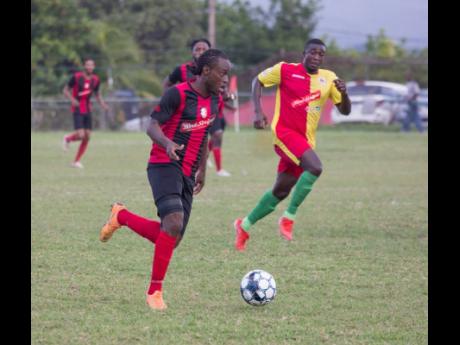 File Kemal Malcolm of Arnett Gardens moves away from Humble Lion’s Gregory Lewis during their RSPL encounter at Effortville in Clarendon on December 29, 2019.

Although Arnett Gardens' midfielder Kemal Malcolm classified their previous National Premier League season as an "up and down season", he said that he enjoyed working under head coach Alex Thomas in his first season in charge of the club.

Thomas took over weeks before the start of last season after the dismissal of Jerome Waite in August 2019. After a slow start, the 'Junglists' were in seventh place with 42 points, one point outside of the play-off slots in March when the season was suspended and ultimately cancelled.

The St George's alumni said it was not hard to work with Thomas seeing how he knew of him during his schoolboy days.

"It was easy for me to gel with him because Alex knows me from playing Manning Cup. So he knows what I can do. He knows my strengths. He also knows my weakness so I mean it was a good collaboration with him," Malcolm told STAR Sports. "It wasn't difficult for me and him to work."

The 30-year-old midfielder lamented the errors which lead to dropped points last season. Ahead of the upcoming campaign, despite the team getting younger Malcolm says that the demand for success would be the same from their supporters.

"I think it was just some simple mistakes that put us in the position that we are in. But this season, now we have a younger team so it's mainly a rebuilding process for us but as you know Arnett Gardens fans it does matter who goes out there," Malcolm says. "They want to win so everything we go out there our main aim and focus is just to do well and win games."

Malcolm is one of the five local-based players who have been called up for the upcoming friendlies against Saudi Arabia on November 14 and 17 in Riyadh. The local delegation is scheduled to leave the island tomorrow to start their journey but are expected to be administered COVID 19 tests today as part of the health protocols.