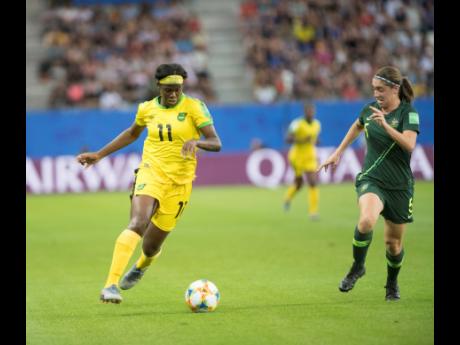 National women's striker Khadija Shaw continues to set the goal-scoring pace in the French division one Feminine, registering her second hat-trick of the season as her club Bordeaux strolled to a 5-1 win over Dijon on Saturday at the Stade Sainte-Germaine.

Entering the second half tied at 1-1 and a player advantage after Dijon midfielder Lena Goetsch was sent off in the 31st minute, Shaw capitalised and scored in the 47th, 57th and 65th minutes to lead Bordeaux to their third win of the season.

Dijon had taken the lead in the fifth minute through Rose Lavaud, but the home team found the equaliser six minutes later through Claire Lavogez with her second goal of the season. Maelle Garbino added a fifth three minutes before full time.

This was Shaw's third multi-goal game this season and is now the league's leading goalscorer with nine goals after seven games , almost equalling the 10 goals that she scored last season. Clara Mateo of FC Paris is in second place with seven goals, and Kadidiatou Diani of Paris Saint Germain (PSG) is third with six.

Bordeaux are currently in fourth place with 11 points, two points away from third-placed Montpellier, who have 13. With plans being crafted for a national senior camp with mostly overseas-based players, Shaw is expected to feature among those selected if and when those plans are finalised.

She will hope to extend her lead in the Golden Boot race when Bordeaux travel to bottom club Le Havre on Saturday.