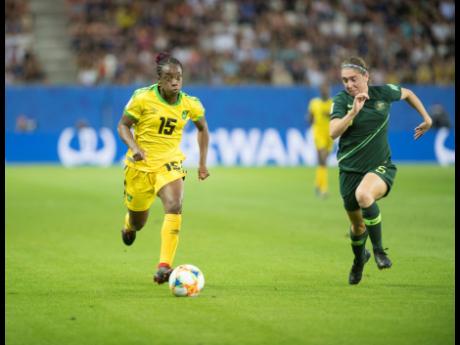 National midfielder Tiffany Cameron helped her Hungarian club Ferencvarosi TC advance to the second qualifying round of the Women's Champions League after a comprehensive 6-1 win over Racing FC Union Luxembourg in their opening qualifying round game in Budapest yesterday.

The 29-year-old midfielder marked her first Champions League appearance in five years with a goal in the 58th minute as the many-time Hungarian champions dominated from the opening whistle and never looked back.

Lara Invanusa opened the scoring early in the sixth minute and Fanni Vago doubled their lead a minute later. Machado managed to cut the deficit in the 25th minute but that was the only response Racing could muster in the game. Sara Pusztai restored their two-goal lead in the 42 minute and got her second and Ferencvarosi's fourth in the third minute of first-half stoppage time. Vago got her second of the game in the 62nd minute to complete the rout.

The last time Cameron scored in the Champions League was on August 13, 2015 as a member of Cyprus club Apollon Limassol, where she scored twice in an 8-0 win over Maltese club Hibernians.

Cameron has enjoyed a good start to life in Hungary since she signed for the club in August, with Ferencvarosi currently second place in the league this season with 20 points after eight games played, one point away from leaders MTK Hungaria who have 21 points.

Ferencvarosi's champions league campaign continues in the second qualifying round to be played either November 18 or 19. However, their next league fixture will be against Kelen SC on Saturday.