Elaine’s season a success with athlete of the year nomination, says James 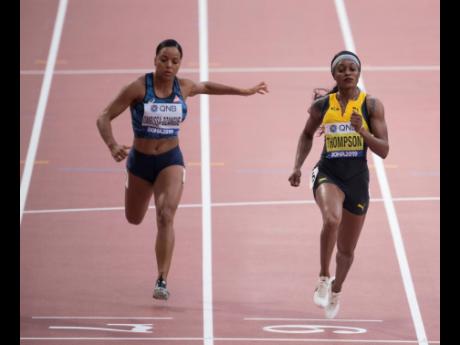 The 28-year-old Herah was among the 10 athletes shortlisted for the award, which was released by World Athletics yesterday.

It is the second time that she has been nominated for the award and her recent recognition comes at the conclusion of an unprecedented 2020 campaign which was hampered because of the coronavirus pandemic. Local athletics was on hiatus from March to July after the ongoing health crisis forced the postponement of the Tokyo Olympics and delay of the 2020 Diamond League season.

James said that no matter the outcome of the voting, she can be proud of how she performed during this season.

"In 2020, the real victory is being nominated among the top 10 of all athletes throughout the world. That is the victory," James told STAR Sports. "So, she has already won by being nominated in the top 10 in the world across all fields of athletics."

She is the only Jamaican athlete to be nominated for either the Male or Female Athlete of the Year for 2020. She was a finalist in 2016 following her 100m and 200m wins at the 2016 Rio Olympics.

The restart of the local track season in July allowed her to complete the majority of her season at home, participating in the Velocity Fest series, before departing for two European circuit meets in September. She finished undefeated in seven 100m races, including setting a world-leading time of 10.85 seconds at the Diamond League meet in Rome on September 17.

James said that her consistent performances this season make her a deserved candidate.

"Sub-11 [seconds] was only run eight times this year by four different women. Elaine alone was responsible for half of all the sub-11 times run through the world this year," James said. "So, she is a worthy nominee for World Female Athlete of the Year."

The five finalists will be determined after voting concludes on November 15 and the winners will be announced at the World Athletics Awards gala on December 5.