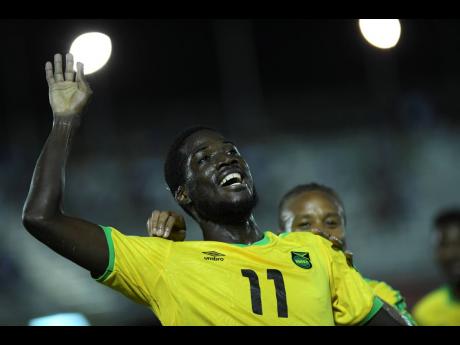 National striker Shamar Nicholson paid homage to his injured national teammate, Maalique Foster, after scoring for his Belgian side in their 3-0 win over Cercle Brugge on Saturday.

With Charleroi already leading 2-0 in the second half, the 23-year-old Nicholson came on in the 68th minute and netted his fourth goal of the campaign in the 80th, returning the club to winning ways after two straight defeats.

He dedicated the goal to Foster, who was shot last week Tuesday in Portmore. On Instagram after the win, Nicholson sent encouragement to the 23-year-old midfielder who is recovering from his injuries. "For my brother, Maalique Foster (MF) Stay Strong Bro," he said.

After a scoreless first half, Charleroi took the lead in the 53rd minute through Ali Gholizadeh before summer signing Saido Berahino doubled the advantage five minutes later from a well-placed header. Since the acquisition of Berahino in the summer transfer window, the competition has increased for starting places as Nicholson has come off the bench in the last two league games after starting six of his 10 appearances so far this season.

The win moves Charleroi back in first place with 22 points, one point ahead of newly promoted club Beerschot and two points ahead of defending champions Club Brugge.

He has been selected for the Reggae Boyz upcoming pair of friendlies against Saudi Arabia on November 14 and 17. Charleroi's next game will be an away trip to 15th place K.V. Mechelen this Friday, after which he is expected to join the senior team for the friendlies in Riyadh, Saudi Arabia.