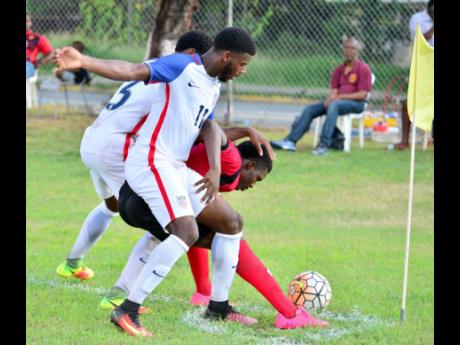 File Zyen Jones of the USA (centre) challenges Arnett Gardens’ Anthony Thompson for the ball in an Under-20 match at Jamaica College on November 4, 2016.

Reggae Boy hopeful Zyen Jones has made his return to Europe to take the next step in his young career as he signed with Hungarian champions Ferencvarosi TC.

The 20-year-old former Atlanta United academy product was presented by the club last week Tuesday and, initially, will join the reserves as he competes for a spot in the first team.

Jones's second stint in the continent comes after playing with German club Schalke 04's youth team in 2018. He last played for the Charlotte Independence of the United Soccer League (USL) Championship in America's second-tier and says that he is excited to hit the ground running with his new club.

"I've only heard good things about Ferencvarosi before, so I'm glad to be here," he said on the club's website. "The most important thing for me now is to get back in the game, be in training. I think I will be able to work with a great coach and players at Ferencvarosi."

Back to his best

Additionally, he said that the thought of the club returning to the Champions League group stages is enticing but that he was fully focused on getting back to his best.

"I have also heard that the club re-entered the Champions League group [stage] after 25 years this year, which is a lucky coincidence from my point of view," he said. "I wouldn't talk about long-term plans yet. The most important thing now is to be able to play football again."

Born in Clarkston, Georgia, Jones has represented the United States at the youth level but is eligible to play for Jamaica through his father, Kevin, who played for Manning Cup champions Jamaica College during his youth football days.

Jones's stints at the youth level include the Atlanta United Academy, which he joined in August 2016 before moving to Germany two years later. He returned to the United States and signed with Charlotte in April 2019. He made 12 appearances that season before being released in January.