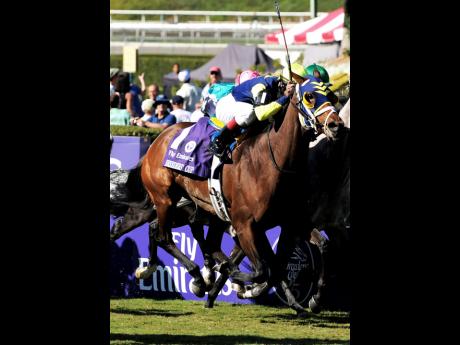 Riding on the eight-race programme, Johnson took the last race of the day with 13-1 outsider Mindfulness, in a seven furlong trip.

He was joined by reigning Woodbine champion, Barbadian Patrick Husbands, who captured race two with 11-1 bet Awesome Overture and Juan Crawford, also of Barbados, who scored in race seven with 9-1 chance Bold Aljabr.

Husbands, who will be dethroned as champion this season, continues to close in on 100 wins for yet another season as he sits third in the standings on 95 wins.

Johnson, meanwhile, who wrapped up his third straight Fort Erie title last week, has shifted his tack to Woodbine for the remainder of the season.

He struck success when he steered the six-year-old bay mare Mindfulness to victory by a head over the three-year-old and upward fillies and mares.

Johnson had earlier missed out on another victory in race six aboard 10-1 bet Six Inch Heels when the favourite Geocentric, with da Silva aboard, beat him by a nose at the wire, in a six-furlong contest.

Husbands, meanwhile, grabbed his lone win over a mile and three sixteenth when he brought six-year-old gelding Awesome Overture with a well-timed run to beat the three-year-olds and upward - which have never won two races other than their maiden - by a length.

Crawford, a regular campaigner at Northlands Park, booted home the five-year-old gelding Bold Aljabr by 3-1/2 lengths, easily trouncing the three-year-olds and upward over a mile and sixteenth.