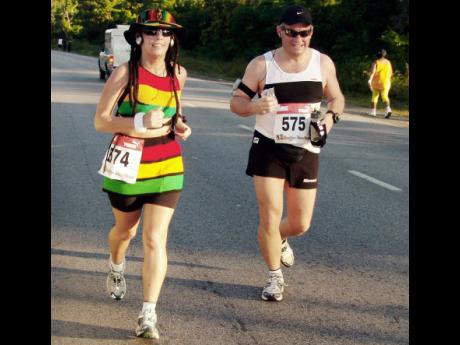 The Burger King Reggae Marathon Grand Prix 2-race qualifier began last Sunday, with runners vying for over $800,000 in cash prizes and the opportunity to compete in the Reggae Marathon event set for December 3 to 5, 2015, in Negril.

The first race was held at Burger King in Mandeville, while the second is set for Sunday, November 8, at the Burger King location in Portmore.

Only runners in the respective 7K- and 10K-run distances will qualify for the series, although there will be a 5K walk in both races.

Richard Lake, vice-chairman of Restaurant Associates, franchise holders of Burger King and sponsor of the series, said the Grand Prix has grown exponentially over the years, and his company continued being pleased with the staging and participation, especially among students.

According to Alfred 'Frano' Francis, race director for Reggae Marathon, Half Marathon & 10K, the middle- and long-distance athletes from schools who have emerged out of the Burger King Grand Prix series continue to make their mark at Boys and Girls' Champs.

The training needed for the 7K and 10K runs in the Burger King Grand Prix also helps them to participate at the highest level in the annual event in Negril.

This year, participants in the Burger King Reggae Marathon Grand Prix will not only be able to register online via the Running Events Limited website, but will be able to pay their registration fee at any Paymaster outlet islandwide through a special arrangement between Running Events and the bill-payment operators.