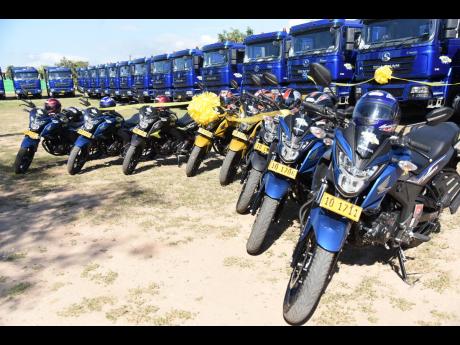 The motorcycles purchased for the National Solid Waste Management Authority on display at National Heroes’ Park on Wednesday.

The National Solid Waste Management Authority (NSWMA), in collaboration with municipal corporations islandwide, will be rolling out a special clean-up programme during the Christmas season.

The programme will target town centres and market districts and aims to boost garbage collection while placing greater emphasis on compliance to minimise the illegal disposal of waste.

Minister of Local Government and Rural Development, Desmond McKenzie, made the announcement during the official handover of 50 garbage trucks and 10 motorcycles to boost the NSWMA's capabilities at National Heroes Park in Kingston on Wednesday.

The minister indicated that technology will be introduced to the garbage-collection exercise.

"In the new financial year, we are going to introduce technology in sweep cleaning. We are going to be bringing at least 10 of these sweep-cleaning machines into the system as part of the new revolutionary approach to garbage collection and street sweeping in the country," he informed.

Meanwhile, McKenzie said the NSWMA's enforcement team has been given the requisite tools with the 10 motorcycles.

"The bikes will make them more efficient to go around the country to monitor and to see where illegal dumping is taking place. They will be in a position to issue more tickets," he said.

McKenzie also announced that new legislation to increase the penalties for the improper disposal of garbage should be ready by next year.

"We are expecting before the middle of next year, we will have the new regulations as it relates to the litter fines," he said.

McKenzie assured that the Government remains committed to providing the resources to address the increasing demand for garbage collection in communities islandwide.

NSWMA Chairman, Dennis Chung, said an increase in the fines and penalties for littering and poor garbage-disposal practices will assist in addressing the issue across the country.

"We can't do it without the fines being increased. We issue over 300 tickets every month. But when you are talking about an average fine of $3,000, it costs you less to break the law than to dispose of your garbage properly," he argued.

Chung urged persons to utilise better garbage-disposal practices, pointing out that "if Jamaicans do not dispose of our garbage properly, then we will never have enough trucks to deal with it".

"So even these 50 or 100 trucks will not solve the problem, because it comes down to civic pride and personal responsibility," he said.