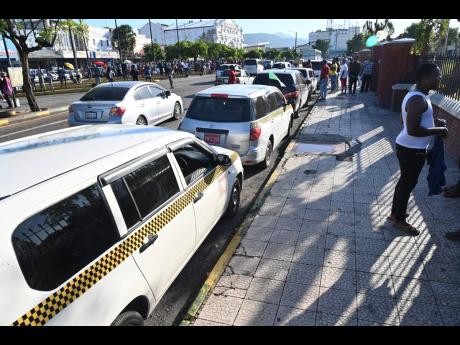 Justice Minister Delroy Chuck has blasted drivers who are demanding an amnesty to pay outstanding traffic tickets, telling them it is a matter for the court, not the Government.

Several taxi operators withdrew their services last month demanding an amnesty similar to the one that was implemented for persons to turn in illegal guns. But Chuck made it clear that there would be no leeway from the Government, based on the amount of outstanding traffic tickets clogging the courts.

Speaking at a justices of the peace commissioning in Ocho Rios, St Ann, on Thursday, Chuck declared that the Government will not back down, even as some taxi drivers remain defiant that they need time to pay outstanding tickets.

"If you fail to pay your tickets in 21 days, it is a matter for the court. You want a payment plan, go and talk to the judge," he added.

Chuck said outstanding tickets are being sorted out and will be on the ministry's website. Violators will be caught and taken to court, he warned.

He said based on the system being implemented, persons with outstanding tickets will not be able to renew their licences or register their vehicles.

"We have some drivers, I don't know where them come from. I don't know where them get them licence ... but their days of reckoning are at hand," he said. "We've mapped out every single ticket issued over the last many years; they are all in the courthouse." He said that there is a room full of outstanding tickets in the courthouse in Montego Bay and hundreds of thousands in Kingston.

Chuck called on drivers to obey the road code and respect the rules of the road, and those using the road.