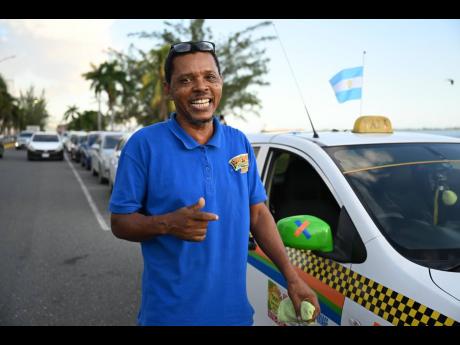 Taxi driver Oral Coleman said he is looking forward to Argentina’s match against Australia on Saturday and he won’t eat until his beloved South American team wins. 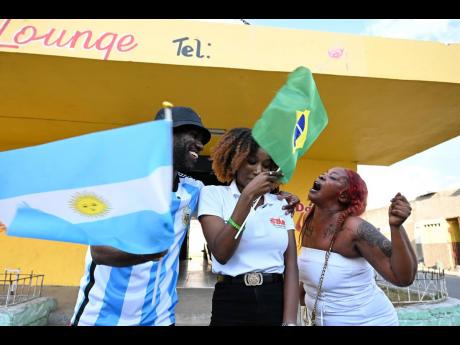 Cheers to the Cup co-host Shanel Lemmie (centre) gets an earful from Argentina supporters, co-host Roxroy McLean and Asheena Bryan, outside the Dat A True Bar in Tivoli Gardens, following the team’s win over Poland yesterday. 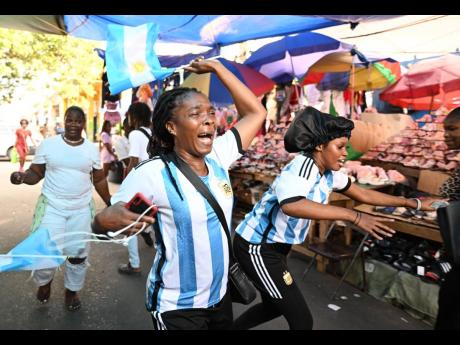 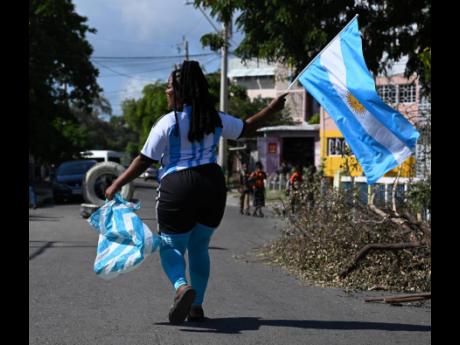 Jody-Ann Walsh marched down Bustamante Highway clad in Argentina team colours on Wednesday. She and other supporters took to the streets to celebrate the team’s win against Poland.
1
2
3
4

After Argentina's round-of-16 qualifying win in the World Cup, long-time supporter and taxi driver Oral Coleman said he will be fasting until his team advances to the quarterfinals.

While wiping his taxi on Ocean Boulevard in downtown Kingston he said, "Saturday morning mi nah nyam until the ball kick off and the ball stop roll, because we know seh we a go a round of eight because wah, Argentina a nuh bait and pon that deh programme deh we nah debate! So tell some bwoy fi lock dem mouth like big gate!"

On Saturday, the South American football kings will play their the team from Down Under, Australia, in the knock-out round. Though Argentina lost their first match in the tournament to underdogs Saudi Arabia, they quickly recovered by winning the two subsequent matches.

He continued, "And then now it leave a doubt now within the mind of the Argentina followers them now fi say 'Bwoy, we outta the game'. But you cyah have three game fi play brethren and lose the first one and say you outta it. You must come more determined and that is exactly what they apply. So me just love that! And that is why we wave we flags and nah stop wave it."

Lauding their performance against Poland yesterday, Coleman said he was quite pleased with the unified playing style of the team.

"When you look and you see how the man dem play ... the man dem play the game with a level of respect because them nuh only rely pon only Messi alone," he said. "So therefore it only show you say the man dem a play with more coordination."

Donning a smaller flag than usual, Coleman joked that it is the value of the Jamaican dollar that has diminished his fever for the South American team.

"Jamaican dollar right now a gasp fi breath, so chu dat now me affi just buy weh me get. Sorry fi know seh a suh di thing set but we a gwaan wave the likkle small one though, cause you see the picture of the sun though (the flag's crest). We as bright as the sun, so all when we a play a night we still a see the ball because we a sun," he said.