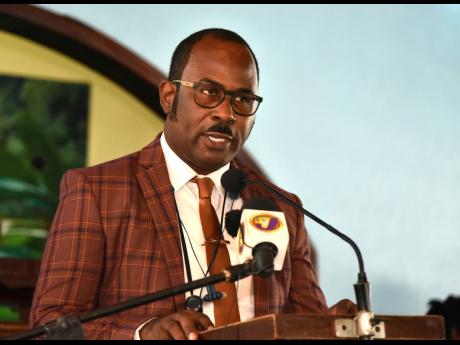 Corporal Rohan James, chairman of the Police Federation, speaking at the funeral for detective sergeant Victor Francis at the Gregory Park Baptist Church in St Catherine on Saturday.

Chairman of the Jamaica Police Federation, Corporal Rohan James, has called on the Prime Minister Andrew Holness-led government to do more for the nation's police who are putting their lives on the line on a daily basis.

James, speaking at the thanksgiving service for slain policeman Victor Francis, said that in addition to ensuring cops get better salaries, the Government should enact legislation with strong deterrence provisions to provide more protection for cops as they perform their duties. He also wants the Jamaica Constabulary Force to be provided with more resources.

"When the prime minister indicates that he is building a legacy... I believe that I should call upon him and believe that he must be able to respond to give us these three items," James said.

Public sector workers, including the police, have been in negotiations with the Government for improved salaries and benefits. James said that it is important that cops receive "proper remuneration commensurate with the risk associated with the profession.

"Jamaica and policing is like walking a minefield," he said. "Law enforcement is one that requires zeal, tenacity, professionalism, and it also require us to be brave in the face of adversities".

The Federation chairman said that security personnel is "the sole buffer between law-enforcement, civility and hoodlums, who can be best ascribed as home-grown terrorists in this country". He said that "If we get the remuneration and the resources" criminals will not be able to feel safe in Jamaica.

"We are prepared to respond to duty's call. All we are seeking is that element of support from our political directorate," James said.