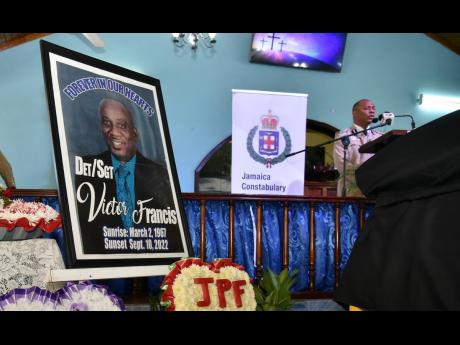 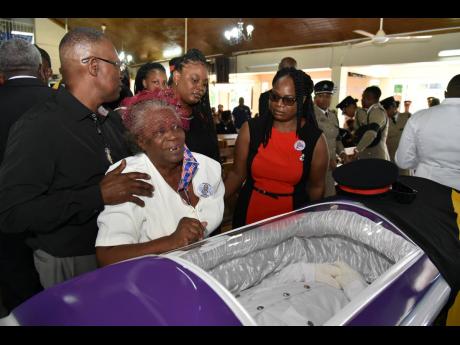 Police Commissioner Major General Antony Anderson has hailed the late Victor Francis, a detective sergeant who was stabbed to death while attempting to break up a fight in his community, as a hero.

The 56-year-old detective sergeant, who gave 32 years of service to the Jamaica Constabulary Force, was fatally stabbed in Gregory Park, St Catherine, on September 10.

Anderson, speaking at the slain cop's funeral at the Gregory Park Baptist Church in Portmore, St Catherine, on Saturday, said the manner of Francis' death brings into focus the high levels of interpersonal violence plaguing the society.

"It is not normal, but our police officers everyday are engaged in this way, trying to resolve issues between people that should not lead to anything more than a quarrel," said Anderson.

The commissioner told mourners that violent means by which people have been choosing to resolve conflicts has been putting a strain on the police force.

The police chief said that Francis, 56, lived with dignity in both his professional and personal life.

"Thankfully, in Jamaica, we have police officers like Victor Francis, who is willing, even when they are in their own time, to come back on duty to separate persons who have these sorts of quarrels and conflicts. He didn't have to, but as I said, it is the nature of the man. So today, we salute him as we lay him to rest. So you have lost a husband, father, grandfather. We have lost a colleague and Jamaica has lost a hero," Anderson said.

The top cop said that Francis was a picture of a disciplined, focused, meticulous and dedicated sub-officer.

"He was not doing policing as a job but as a vocation and a passion," he said.

Christine Francis, the eldest of the slain cop's 11 siblings, described him as a great man who made life easy for everyone around him.

"It made the past few weeks difficult standing in front of the children because everybody can attest that Victor was an exceptional person. The last act that my brother did for me, in this very church -- not yet a year -- November 28, was to walk me down the isle. That's the last act that he did for me. He was just standing there telling the pastor that 'I am giving her away'," she said.

According to his Senior Superintendent Maldria Jones-Williams, who heads the Centre for Investigation of Sexual Offences and Child Abuse, where Francis served up until his untimely death, he was the consummate professional.

"We refer to him as loyal, helpful, kind, a problem-solver. He was miserable, especially when you weren't getting the work done the way he wanted it. But he was also jovial and the young members gravitated to Victor because he was a father figure and he provided guidance while sharing his experiences with them. As a member of the team, other commanding officers who had the opportunity to work alongside Victor would agree that he was one of the most competent and experienced detectives in the CIB," she said.