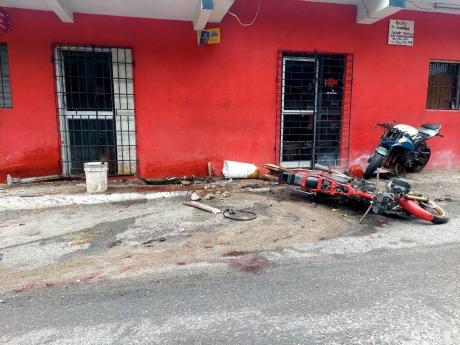 The bike mechanic establishment outside which taxi operator Steadman Newsome was killed on Thursday morning.

A group of children heading to school on Thursday had to scamper during a brazen gun attack in Cassava Piece, St Andrew, which left 53-year-old community chef Barrington Foster dead.

The parent of a 12-year-old who was nearly caught in the crossfire said that her son was very traumatised.

"Him couldn't go school after that, enuh, him a bawl non-stop and even hours after the shooting gwan mi see him still a shake," said the concerned mother.

"Him say at one point him think him did a go dead after him drop while him a try run from the scene. Mi could a deh yah and get a call say mi pickney dead because him deh at the wrong place at the wrong time," she said. The murder has also sparked fresh fears as residents say that the area has been tense for some time.

"A couple weeks ago one shooting gwan in here and talks a mek between di likkle tick tick [youth] inna di place. Wi affi worry because a whole heap a drive-by gwan inna Cassava Piece and wi no know weh dis latest shooting a spin off from," said one resident who is said to be close friends with the deceased.

"Barry a good man because when anytime there is a set up inna di community, him will come cook for you. Him love drink and him tek good care of his two pickney dem. Mi cyah recall Barry and nobody inna war," the person said.

The police's Corporate Communications Unit said that at 6:50 a.m., Foster was standing along the Cassava Piece Road when a motor vehicle drove up and occupants opened gunfire hitting him several times. Foster's spouse said that he left the house to purchase a pen for his daughter. She said she heard the gate open and reasoned that Barry had gone out.

"But a when mi hear the shot dem start fire mi start worry. So when mi go over deh now mi wrap him up with the sheet and start ask a who shoot him. Him and nobody no inna no mix up... maybe a mix dem mix him up with somebody because Barry nah buss gun or trouble people," she said.

It is rumoured that Foster was the target of a shooting last year when he and a group of men were fired upon while standing at a corner. However, Senior Superintendent Shericka Service, who is the commanding officer for the St Andrew North Police Division, could not confirm this.

"Those allegations are swirling but I would have to do some checks to confirm or otherwise. But the investigations into Mr Foster's death are ongoing," she said.

Meanwhile, about an hour before Foster's murder, gunmen killed Steadman Newsome, a taxi operator of Trench Town, Kingston 12, outside a mechanic shop in nearby White Hall Avenue.

The 66-year-old allegedly refused to comply with two gunmen who were demanding his vehicle. The police said that they were summoned by residents after they heard loud explosions.