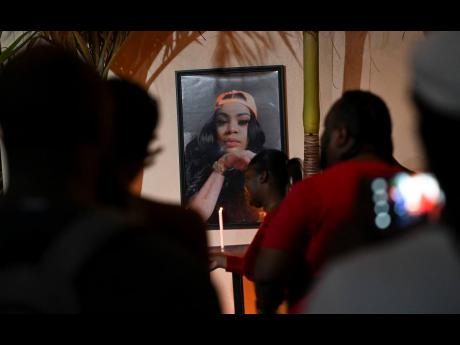 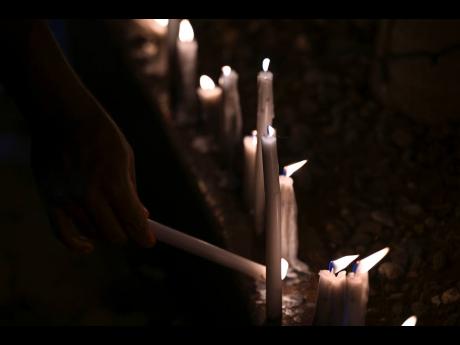 A mourner lights candles during the vigil.
1
2

Last night, the family and friends of social media influencer Aneka 'Slickianna' Townsend were overcome with sorrow as they mourned her death at a candlelight vigil for her in New Kingston.

The melancholy mood was summed up by the 35-year-old's cousin, Gujaun Walters.

"A three days now mi no eat and not even work mi no go due to how this hit me hard," said Walters as the words of Gramps Morgan's People Like You played in the background.

"Yuh cyah be round her for more than an hour and she no ask yuh if yuh no eat something or offer yuh something. She is that type of person. She is the one who will step out of a crowd and check on the least important. That is who is she, very friendly and not a prejudice," Walters added.

He said that he and Townsend had a close relationship growing up in Maxfield Park, but that the frequency of their communication dropped due to the rigours of work and adult life.

"That is what makes the news so hard to take because as mi say, mi and her grew up. But we haven't spoken in a while so this hit even harder. I am trying to deal with it the best way I can but the feeling is too much to bear at the moment," he said.

When THE STAR attempted to speak with Townsend's mother, Joy Smith, we were told that she was too deep in grief. This mirrored the feeling of other relatives and close friends, one of whom said that she is now forced to seek medical attention.

"I have been throwing up since Friday. I can't sleep, I can't eat, I am crying my eyes out over what has happened to my friend, who is nothing but a loving soul. Is this morning I have to visit my doctor to attend to the issues because I feel so weak, even right now. But I had to be here," she said.

Adair, who said he was friends with Townsend for over a decade, described her as a selfless celebrity who valued people equally.

"She is a very supportive, outgoing and caring person. No matter what people said about her, bad or good, she never made that get her down. She never care how good the next person a do, she a go always support them," he said.

"She never deserved what happened to her and the potential that she had in her, if she did just get to live her life, I know she would be doing great, great things. One thing I realised about everybody in business who spoke about her is that she have a magic touch," said Adair.

"She will see you randomly, literally, and say something like 'Mi like yuh shirt', and then push you as the individual to like the shirt also. That personality trait she has is very rare and that is what gravitated me to her. Once you see her you will smile and that is not to say she is a comedian, she is just beyond a 'spirit tek' person," added Royal.

Townsend's decomposing body was retrieved from the sea in Reading in Montego Bay, St James, around 9:30 a.m. last Friday. The police say that her body was discovered by persons who went to use a beach.

The police have named 33-year-old Rushane Patterson of Prospect district in Hanover as a person of interest.