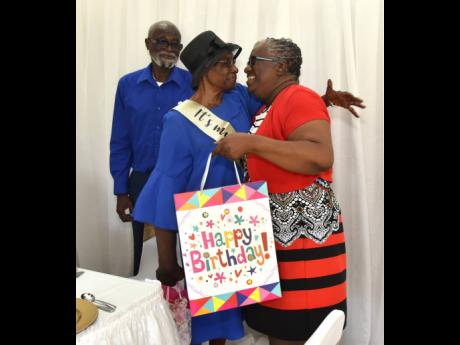 Williams gets a gift and a hug from Jennifer Allison-Small at her birthday event. 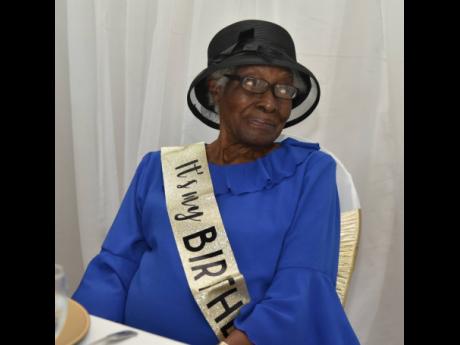 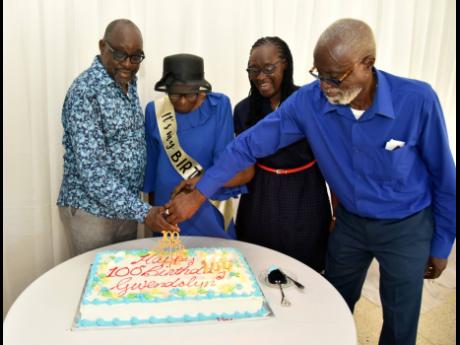 The centenarian kept a smile throughout the proceedings, and on each occasion when her cheeks widened, there was also a genuine look of appreciation in her eyes.

"I feel good," said the former seamstress, who was born on October 10, 1922, and grew up in Golden Hill in rural St Andrew.

"All of my children, except for one of my sons, and my grandchildren are here today and I feel so happy. I never expected this at all," said the mother of four. The beaming senior citizen told THE STAR that her secret to a long life was an undying love and devotion to God.

"He is my rock and shield, enuh, everything I give him praise for. I don't have a special way to live other than to be good to others, serve the Lord and obey his commands," said the devoted Christian, who attends the Emmanuel Temple Church of God in Old Harbour, St Catherine.

Williams was described as a soft-spoken woman whose love language is empathy. She has done this effortlessly throughout the years, according to Hallowell Richards, 62, who is her only daughter.

"I can confide anything in her. She is gentle, a godly woman. I have never heard her say anything that is not right. I've never heard her curse, and I watch with great admiration how she effortlessly impacted people around her with her grace and caring ways," Richards said.

Although calm in demeanour, Richards said that her mother also has a warrior spirit. This, she said, was exemplified 25 years ago when the former domestic helper was diagnosed with breast cancer.

"I was pregnant at the time with my last child, and she was to do the operation little before I gave birth. But she told everyone that she wanted to wait until after I gave birth, because she wanted to meet her grandchild. It wasn't easy for her, she was 75 at the time and even though they detected the cancer at an early stage, the way she handled it and herself only reminded of how strong a woman she is, and has been," Richards said.

Today, Williams, who has seven grandchildren, two great-grandchildren and one great-great-grandchild, spends her time reading her Bible, listening to the radio and watching gospel programmes on her television. She still tries to be as independent as possible, caring for herself as much as possible.

At her birthday party, she was also presented with a portrait of her younger self, which brought out her biggest smile of the day.