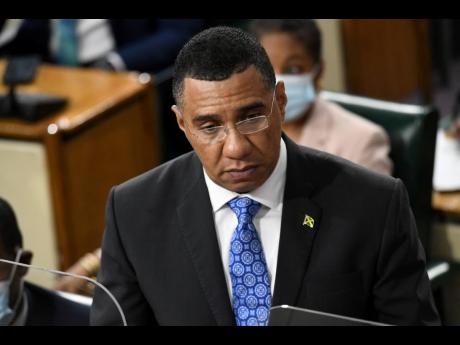 Out-spoken party promoter Marlon 'Musique' Campbell believes that Prime Minister Andrew Holness should drop his 'Brogad' moniker, as it appears hypocritical for him to embrace it while criticising the dancehall genre from which it originated.

The term 'Brogad' rose to prominence in the 2019 song Custom by deejay Daddy1. The deejay described himself as a 'top choppa', a term ascribed to players in the illicit lottery scamming trade. Holness embraced the name, temporarily changing his Twitter handle to the 'Most Hon. Brogad'.

On Tuesday, the Broadcasting Commission imposed an immediate ban on the playing of music that promotes or glorifies lottery scamming, the use of the illicit drug Molly and illegal guns.

The move has since rehashed debates that the authorities were only using dancehall as a scapegoat because of an inability to properly address crime and violence. Holness has also publicly voiced his disapproval of some dancehall lyrics.

"He shouldn't have taken on that moniker in the first place. I can see how it might be seen as hypocrisy if he then takes on a moniker from dancehall and then critiques any aspect of dancehall as such," Campbell told THE WEEKEND STAR.

"Perhaps it would be prudent at this point for him to publicly distance himself from said moniker. As it is, the term itself is not an issue because people were using it like 'wah gwan mi Brogad'; it is a term of endearment. But I think the issue arises because people are saying that because of the allegations that surrounds the source of it, and mark you these are still allegations, but ... you have to remain above reproach. So yuh cyah have no window weh people can criticise," Campbell added.

Campbell said that while he understood the ban, he did not believe it will achieve its intended target as many artistes are not making their music for radio.

Political scientist Dr Paul Ashley agreed that Holness was hypocritical in criticising dancehall, but stressed that the move to take on the moniker was a smart one as "that's the story of politics".

Ashely suggested that a ban will not work as it does not address the crime situation.

"Probably you can argue that it [the ban] is a tiny step probably in a big direction because radio is really a small part of the listenership," he said.