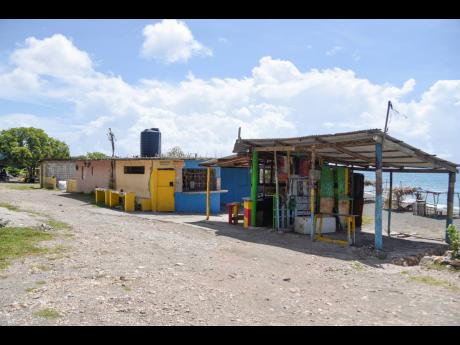 A section of the popular Bob Marley Beach in Bull Bay.

Two families who for decades have built their lives and livelihoods at the Bob Marley Beach in Bull Bay, St Thomas, are now in a state of confusion as the imminent threat of displacement looms large.

They are reportedly being displaced to facilitate the construction of an exclusive hotel on the world renowned recreational site. The families expressed their displeasure on Thursday when THE WEEKEND STAR visited the area, a day before the scheduled start of the impending development. According to one woman, who claimed that her family have lived on the property for the past 60 years, the situation is causing a lot of unease since they have made steps to legitimise their usage of the land.

"I am the third generation, I have been here all my life. We are not squatters and nobody has told us to move. We are the face of this place, this family," she said.

"We are not criminals, enuh, so if we are doing everything right up to today date and no one has come to say 'Bwoy, unuh deh yah long time and 'x', 'y', 'z', whatever, we just affi gwan stay and watch wah gwan. We do everything by the books. We have been living here and one day some people pop up from the Morant Bay Tax Office and explained to us that where we are is called Top Beach and showed us paperwork of the people who used to live here. When they give us the paper, my father never hitch. We just move on same time and start do the proper thing until we can start claim for adverse possession. So we not squatting. So dem telling us that we have to leave, my question is - go where? We are here for over 60 years," she said.

Within the Jamaican law is the Prescription Act which states that if a person is using a space for more than 20 years, then they have the right to continue to use the space in perpetuity (no fixed time).

The residents of the Bob Marley Beach property including fisherfolk have claimed these rights, saying that they are prepared to use the courts if necessary.

Another resident, who also spoke on condition of anonymity, said she was disturbed by how things have unfolded in the past week-and-a-half when she was first told about the development.

"Right now wi don't have any light or water and is dem cut the light because them claim say demolition a start tomorrow (Friday). We don't know what to do, we have no where to go and we are not pleased with how things are unfolding. It is not like we got adequate notice about these things," said the concerned resident who said she has not received a service of the eviction notice in writing.

When contacted for a comment, Member of Parliament for St Thomas, James Robertson, said he was unable to speak on the matter because he did not have enough details.

"All I know is that the issue is between owners of the land and those who don't own it. I can't speak any further because I don't have the details," he said.

President of the Jamaica Beach Birthright Environmental Movement, Devon Taylor, said he was deeply concerned about the situation and said that his organisation has acquired the services of attorney-at-law Marcus Goffe for legal guidance.