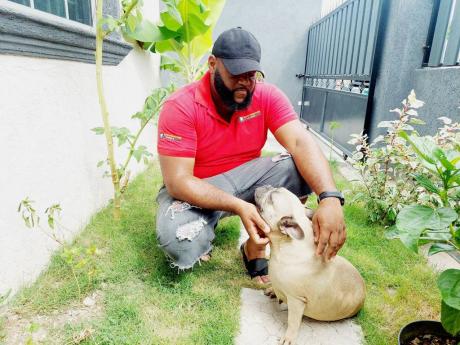 Morris Goode pets a French Bulldog at his home in St Catherine. 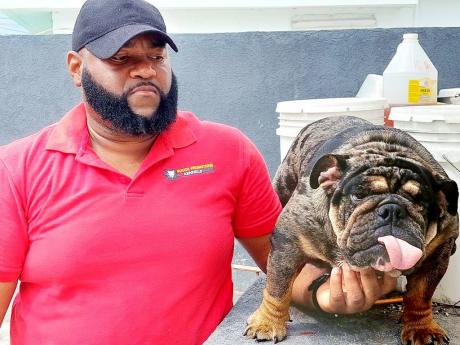 Morris Goode pets an English Bulldog at his home in St Catherine. 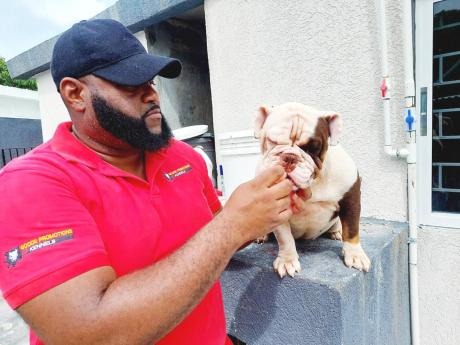 Dog enthusiast and breeder Morris Goode feeds one of his English Bulldog puppies with a sausage.
1
2
3

The old adage that a dog is a man's best friend rings true for businessman Morris Goode, whose love and affection for canines goes way beyond the ordinary.

The 37-year-old businessman says he spends hours each day nurturing and grooming his dogs even though the vocation has cost him millions of dollars in losses over the past 20 years.

"I love dogs, I rather having dogs around me more while than people," says Goode, during an interview with THE STAR at his home in Independence City, in Portmore, St Catherine, on Saturday.

The dog enthusiast says his love for canines started out with his mongrel pet Tumpa at a very young age.

"She was a regular little mongrel, I was about 10 but I got her, and my experiences with her kind of shaped my love for dogs," Goodie said.

He now raises a variety of dogs; American, French and English bulldogs, and has a desire to acquire and also raise Bull Terriers.

Goode said that owning and taking care of dogs can be a difficult and expensive undertaking. He said that it takes an average of $60,000 per month to care for his six bulldog pups.

"Sometimes you don't get time to spend with anyone. I am up from 5 a.m. every morning. If you don't have the dedication and the time to do this it makes no sense. Sometimes wife or kids want to go out and it doesn't work like that because you have to literally attend to the dogs around the clock," he said.

"You can make money from it but if you don't have the dedication and time for it, don't even think about doing it. If you are looking for a buck or two, this not the business for you. You have to love the animal them to want to breed and raise dogs," Goode added.

"It is a very high demand market for the types of dogs that I have because it is not a whole lot of breeders. So once you have pups they are going to go like hot bread," he said.

The experienced dog breeder said it is not unusual for persons in the business to suffer setbacks. He recalled at least two occasions where he suffered financial losses after his dogs died.

"I experienced one of the biggest losses ever. I bought a dog for US$3,000 and the dog just got sick and died two weeks after. Then another time I bought one for like US$5,000 and he got heatstroke and died," he said.

Goode will showcase his dogs at Portmore Bully Mania Dog and Family Fun Day & Expose, slated for December 4 at Caymanas Park in Portmore. He said the event will see other dog owners bring their canines to be judged by a representative of the American Bully Kennel Club, the largest bully kennel club in the world.

The dogs set to be on display are the French, English and American Bully bulldogs as well as Rottweiler, German Shepherd and Doberman Pinscher.

"It is a family show but mostly we are targeting the American Bully guys. It is really a Bully show but we decided to put in other things to make it more entertaining for the patrons coming," he said.