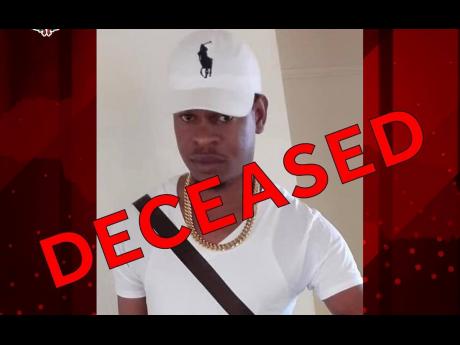 Her voice cracked several times and then she broke into tears. The reality of losing her close friend, Rudolph 'Boxer' Shaw, was too much for Jane* to accept.

She said that while the 30-year-old was "no angel", he was never the beast that the police made him out to be. In fact, she said that politicians from both side of the fence were associated with him.

"I remember one time (name omitted) tell him fi watch him friends dem because dem never like him ... Politicians ... from both sides used to deh round him nuff," she claimed.

The police described Shaw as a "long-time staple on the most wanted list in the divisions of St Catherine North and St Catherine South". He was charged with two counts of murder, two counts of wounding with intent, illegal possession of firearm and ammunition and absconding bail. At the time of escaping custody, he was awaiting his next court date on October 12.

The murder-accused was killed by operative from the Jamaica Constabulary Force's Counter Terrorism and Organised Crime Investigation Branch at a guest house off Molynes Road in St Andrew on Saturday, two days after he escaped from custody at the Kingston Central lock up.

"I am not going out to stay here tonight and pretty up things to say he was an angel, but Shaw helped a lot of youths," a tearful Jane told THE STAR via telephone yesterday.

"I saw him take off his slippers and give to a little youth who did not have it. I saw his mother bring barrel of food, and he shared out all of the food that none was left back in the house," she said.

Although Shaw's name became synonymous with a number of murders and shooting incidents in Clarendon, Jane maintained that the rumours were orchestrated.

"It started from a policeman who never liked Boxer went ahead blamed him for the death of his mother, who was killed by gunmen in early 2020," she said.

She said that the murder was theorised as a reprisal to the death of Shaw's friend, who was killed weeks earlier in January, allegedly by the policeman. She claimed that her friend was not involved in the incident as he was not living in Clarendon at the time, largely because he was in fear of his life.

Believing that he was marked for death, Jane said Shaw had no choice but to flee the country. He absconded bail and went to the Cayman Islands, but was caught and deported to Jamaica in July.

"Even the murder charge that they brought him back for from Cayman, Shaw wasn't in the island when that incident happened, and I have proof of that -- pictures, voice notes, everything. Shaw was never here, and they charged him for those. Why you think him escaped from Central? Shaw escaped from Central because they isolate him in the maximum security area for a month and he was in fear for his life for the next court date," said Jane.

While law enforcement officials label Shaw as a dangerous man, Jane said she did not see those characteristics in him. She said, however, that he made some bad decisions that eventually cost him his life.

"If him did just listen to his mom, then maybe what happened wouldn't happened, or maybe what they put his name on wouldn't happened. When he went away to live in Mandeville, and we told him not to come back to Longville, if him did listen from then, maybe him would be in a better place today," she said.

Jane said that her last conversation with Shaw took place several minutes before he was killed during an alleged confrontation which led to his death.

"Him send me a couple texts to show his swollen foot because when he was escaping from the cell he said he had to jump over the barb wire fencing at the back of the station, but he fell hard and dislocated the bone in his right ankle. He told me that he was getting rest because the doctors gave him medication for the injury," she said.